Joe Burrow thrived in LSU’s revamped offense as the Tigers went perfect in the SEC. LSU notched wins over Georgia, Alabama, Florida, Auburn, Texas and Texas A&M. Burrow is the favorite to win the Heisman but the Tigers have a bigger trophy on their minds. Heading into the playoff announcement, LSU head coach Ed Orgeron noted the team was not concerned about their ranking.

“I think we’re a darn good football team,” Orgeron told ESPN. “We don’t know. I’ve told the team it doesn’t matter. It don’t matter where they rank us, where they tell us to go. We’ve got to win the next game. That’s all that matters.”

This is a particularly strong playoff field with three of the four teams going undefeated heading into the semifinal matchups. Clemson, Ohio State and LSU are all perfect heading into the postseason. Clemson head coach Dabo Swinney discussed how the three teams compared after the Tigers won the ACC Championship.

“It’s hard to be undefeated in any league,” Swinney said, per 247 Sports. “Ohio State and LSU, I mean, unbelievable, unbelievable years because it is so hard. I have such a great appreciation for that accomplishment. LSU has been an unbelievable team. I would imagine they’d be one. I think they won pretty big, didn’t they? I didn’t see the end of it, but they were winning pretty big. What was the Ohio State score? Was it close? So pretty close game.

Here’s a look at our projected College Football Playoff bracket, seeds and teams. We will be updating this page once the official announcement for the playoff matchups is made. 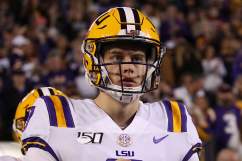