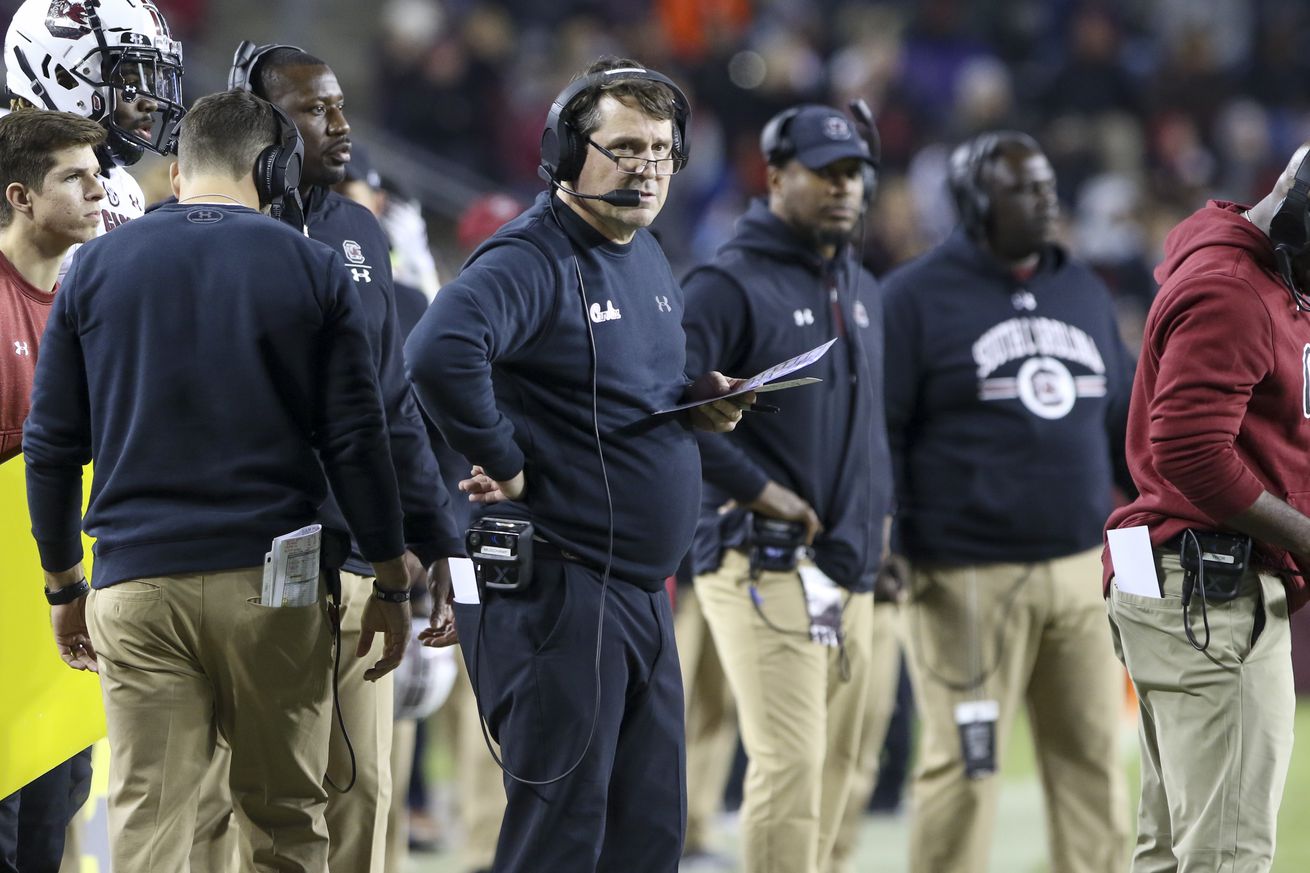 Sports are still slowly inching back toward normal, but things are far from quiet.

While sports are still largely on pause due to the coronavirus pandemic, things are far from quiet. Civil unrest has erupted around the country — and the world — in the wake of more police brutality against black people, this time ignited by the horrifying deaths of George Floyd and Breonna Taylor.

South Carolina’s football players have been among those not standing idly by, taking to Columbia’s streets with coach Will Muschamp this past weekend to march in a peaceful protest. Here’s a sampling of some tweets — including one from Bernice King, Martin Luther King Jr.’s daughter — that show the Gamecocks’ thoughtful approach to the protests.

“Why not us? Why not this generation take a stand and try to put an end to racism and police brutality”@FDpatriots product Dakereon Joyner (@Cant_StopCinco) and @GamecockFB players out protesting in Columbia today pic.twitter.com/31dtJAnH5K

“Matter is the minimum.” pic.twitter.com/4CHwVxsd92

Muschamp had this to say about the team’s involvement during a Monday call with the media:

“It’s sad that in 2020 we’re having these conversations. The two words we took as a team from this are educating and communicating. The more you know about somebody, the more you feel comfortable with them. The two unacceptable words at this time are silence and violence. Actions are louder than words. I can put out a paragraph on social media, that does nothing compared to what we did Friday as a football team.”

Definitely proud of how the players and coaches in this program and university are conducting themselves in the midst of all this.

Continuing with the social justice theme, men’s basketball coach Frank Martin has been tabbed to lead the National Association of Basketball Coaches’ Committee of Racial Reconciliation, newly formed in response to the issues of the day. Certainly an honor for him, and by extension, the program.

In case you missed it, women’s basketball coach Dawn Staley also added her voice to the topic, publishing a moving article via The Players’ Tribune. The whole piece is absolutely worth a read, but here’s a detail I found particularly affecting:

Both my parents were born and raised in South Carolina, but my mother had to leave when she was 13 years old because my grandmother was afraid she might get lynched.

It was about 60 years ago, on a normal day. My grandma sent my mom out for meat from the store. The store owner gave my mom a hard time, trying to make her take some old meat from the back, instead of the fresh cuts in the refrigerator out front. My mom ended up telling him that she wasn’t gonna take bad meat home, and he ran her out the store. Told her don’t come back. My grandma was so scared of what that store owner might do after my mom told her what had happened that she packed my mom’s bags and sent her to live with family up north.

Kudos to Staley for continuing to be an incredible leader, and sharing such a profoundly personal window into her thoughts.

Over the weekend, the home security company’s head man sent out an email with tone-deaf and insensitive remarks about the current protests, which resulted in swift retribution once the email became public. The Carolina Panthers, Charlotte Hornets, Charlotte Knights, and N.C. State all dropped CPI as a sponsor, and the Gamecocks were not far behind them. Athletic director Ray Tanner had this to say on the matter:

“Our University and our athletics department stand for equality and justice for all. Our student-athletes, coaches and staff have taken part in peaceful protests and made statements in their support for ending racism and social injustice. We should all be committed to supporting these efforts.”

Again, well done by the university.

Switching gears slightly, but still on a philanthropic bend, quarterback Ryan Hilinski’s family foundation will use Oct. 3 — “3DAY” — as the kickoff for College Football Mental Health Awareness Week, aiming to increase resources for athletes struggling with mental illness in honor of Hilinski’s older brother, Tyler, who took his life in 2018. South Carolina is a founding partner, and fellow SEC schools Arkansas, Missouri, Ole Miss, Tennessee, Texas A&M, and Vanderbilt are on board as well.

Now for some real, live sports news! We’ve got the first injury report of the summer, as Muschamp shared with reporters that redshirt junior receiver Chad Terrell (torn ACL) and redshirt sophomore linebacker Rosendo Louis (quad surgery) are out until September.

In more football news, a few recruits South Carolina’s in the mix for are expected to make the call soon. Three-star linebacker and JUCO prospect Navonteque Strong, three-star athlete Raheim Sanders, and four-star defensive end Jahvaree Ritzie are likely to announce this week. South Carolina’s class is currently 69th (not so nice) in the 247Sports composite rankings, although the Gamecocks have just six commits right now.

Staley putting together another blockbuster class

Speaking of recruiting, if you’ve missed what Dawn Staley has been up to this offseason, you’re gonna be in for one happy surprise. The Gamecocks have pulled in a trio of five-star prospects — guard Saniya Rivers (ranked third overall nationally by ESPNw), forward Sania Feagin (No. 6), and guard Bree Hall (No. 26). South Carolina is still awaiting one more commitment for its 2021 class, so Staley’s not even done yet.