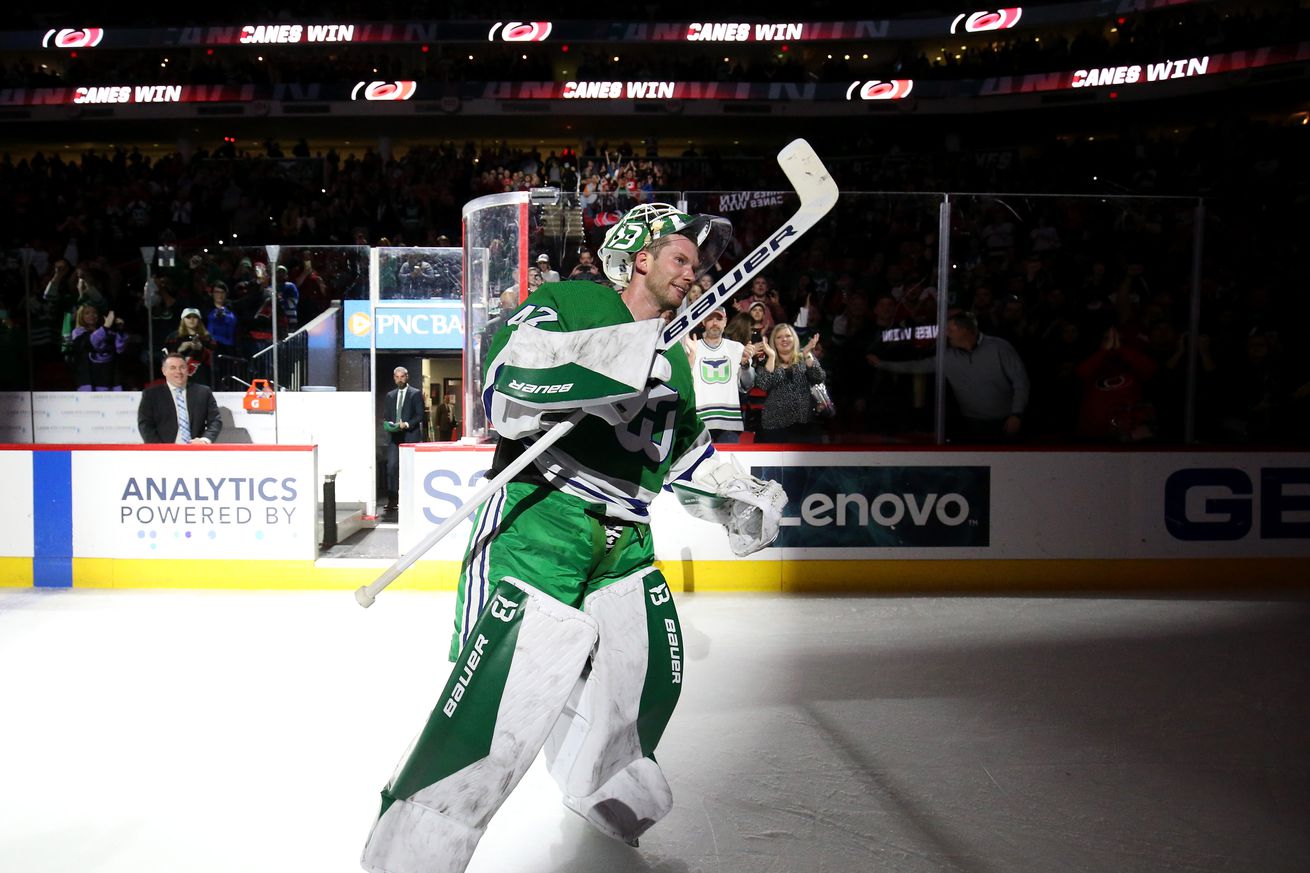 The Carolina chapter of the Professional Hockey Writers’ Association has chosen James Reimer as the team’s nomination for the Bill Masterton Memorial Trophy.  The Bill Masterton is awarded each year to an NHL player who best represents commitment and perseverance to the game of hockey. Each chapter nominates a player, and then those 31 will eventually be narrowed down to a final three.

Goalie James Reimer is the Carolina Hurricanes’ 2020 nominee for the Bill Masterton Memorial Trophy, awarded each year to a player who represents perseverance and commitment to the game of hockey.

Coming into the season, Reimer wasn’t looking like much.

The Panthers had been looking to move his contract and were even willing to exchange burdensome goalie contracts with the Canes, taking Scott Darling as well as a sweetener 2020 sixth-round pick.

Florida ended up saving more money against the cap by immediately buying Darling out and pushing the cap hit back an additional two years. For the Panthers, they had been willing to pay more in the long run to have the more immediate cap relief as they were pursuing both Sergei Bobrovsky and Artemi Panarin, of which they ended up landing only the former.

The veteran goaltender was coming off of one of his worst seasons in Florida which during that season he had seen his minutes reduced and a 0.900 save percentage and 3.09 goals against average.

Carolina was looking to at least fill one of its goaltender spots by acquiring Reimer with both Petr Mrazek and Curtis McElhinney heading to free agency. Mrazek eventually signed, but with McElhinney’s departure, Reimer was given a shot to fill the tandem and he quickly managed to find his game.

Reimer finished the regular season with a record of 14-6-2, including an 11-5-0 road record, three shutouts and a 0.914 save percentage and 2.66 goals against average.

One of his best games of the season was one of those shutouts, a 41-save, 2-0 victory over the LA Kings on Whalers Night. Not only did he make a few robbery saves against Adrian Kempe who was all over the ice that night, but after the game he was battling back a cough during his press scrum, showing he may have been fighting through a bit more than a torrent of shots.

Reimer proved to be a reliable netminder and even off the ice, he was a constant bright spot in the room, willing to talk to the media and always wearing a smile.

While he could have shown more frustration and doubt coming into the season, having been dealt as part of a pure two-way contract dump, he went to work and showed many in Carolina that he still was more than capable of winning at the NHL level and as such, he is the Hurricanes’ nomination for the Bill Masterton Memorial Trophy.