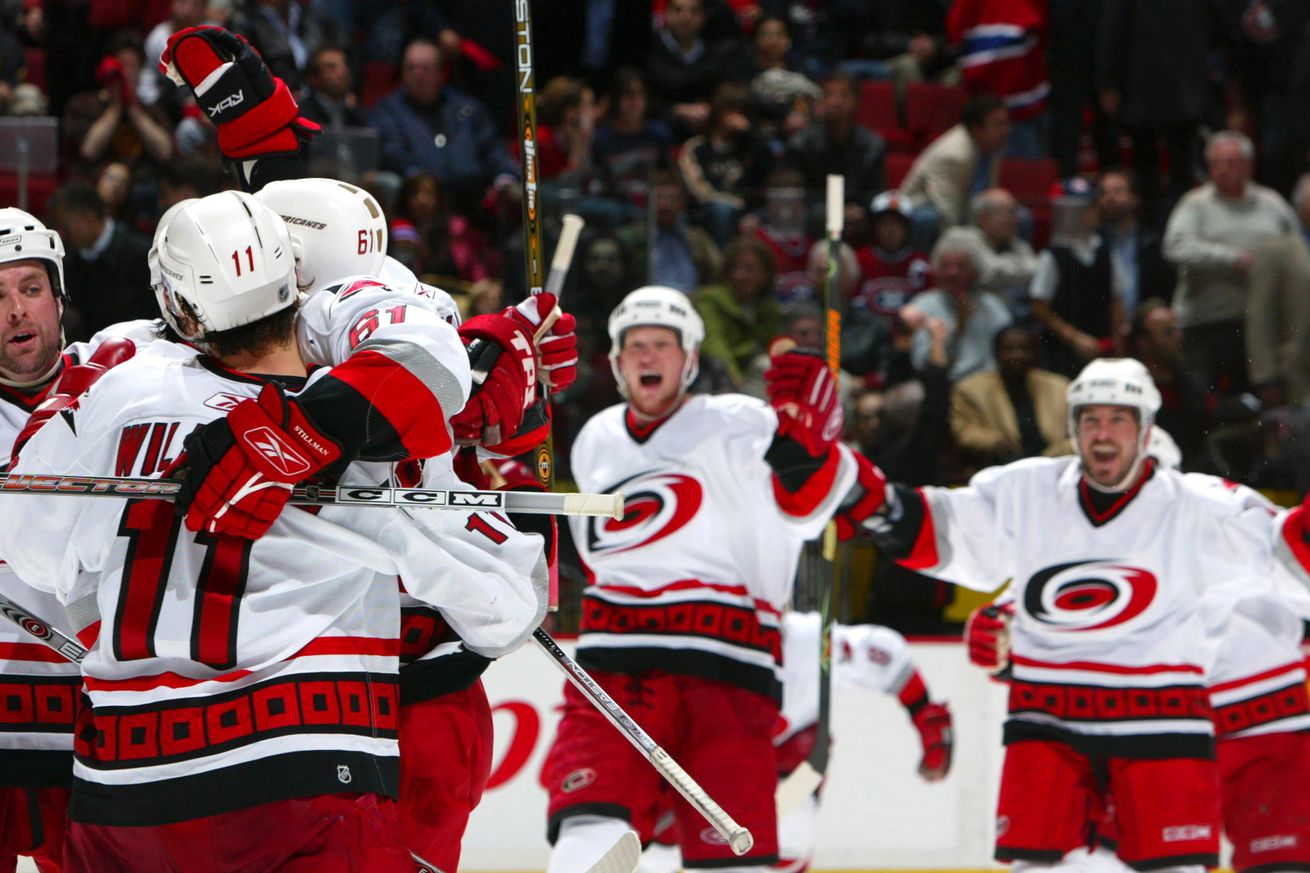 The Hurricanes’ storybook 2006 Stanley Cup run began with an immense challenge in the form of the seventh seeded Montreal Canadiens. After the Habs stole the matchup’s first two games in Raleigh, the Hurricanes rattled off three straight to take a 3-2 series lead into the Bell Centre for Game 6.

After Sheldon Souray and Mark Recchi exchanged first period goals less than a minute apart, the game remained deadlocked through the final 40 minutes of regulation and headed to overtime.

Just over a minute into overtime, the Canadiens exit their defensive zone with Michael Ryder racing through neutral ice. Just as he crosses the Carolina blue line, Ryder is stood up by defenseman Frank Kaberle and the puck changes possession.

With the rest of the Canadiens on their way to make a line change, Ryder should have just put the puck deep in the Carolina zone to allow Montreal’s fresh forecheckers to go to work rather than try to sneak around Kaberle.

Instead, Rod Brind’Amour picks up the loose puck and feeds a curling Cory Stillman at the Montreal blue line. Stillman takes two steps into the zone and rifles a shot past goaltender Cristobal Huet.

Brind’Amour fumbles the puck a little bit, forcing Stillman to slow his momentum almost to a full stop in order to remain onside. After receiving the pass flat footed and on his backhand, Stillman can’t generate the speed to get around the oncoming Canadien and instead opts to shoot.

With the teams switching ends in overtime, both squads have to deal with the long change. In this instance, all four new Montreal skaters have a ton of ground to make up to catch Stillman.

Forced to recover after the Ryder turnover, Craig Rivet sprints back towards Stillman from across the ice.

Because Stillman had to stop his momentum, Rivet actually does a very nice job getting back into the play and getting his stick in Stillman’s shooting lane. Rivet would normally angle his blade at a steep enough angle to guide the puck above the goal and into the protective netting. But because he is late arriving to the play he must just reach his stick out in desperation, hoping to get a piece of the puck.

Rivet’s outstretched arm turns his stick blade nearly flat to the ice, which instead of sending the puck out of play, acts as a ramp for the Stillman shot, accelerating it just high enough to beat Huet on the glove side.

The deflection leaves Huet clueless, as can be seen from the net cam.

Huet’s initial glove movement is to his left and down, but elevates once he accounts for the deflection’s impact. While most coaches would like to get a save on an unscreened shot from well out, Huet cannot react quite in time even from long range. For Huet, it would be the final playoff game the French netminder played as a Canadien.

The Hurricanes would move on to face the red hot New Jersey Devils, who had just swept the New York Rangers to extend their winning streak to 15 games, in the Eastern Conference Semifinals.