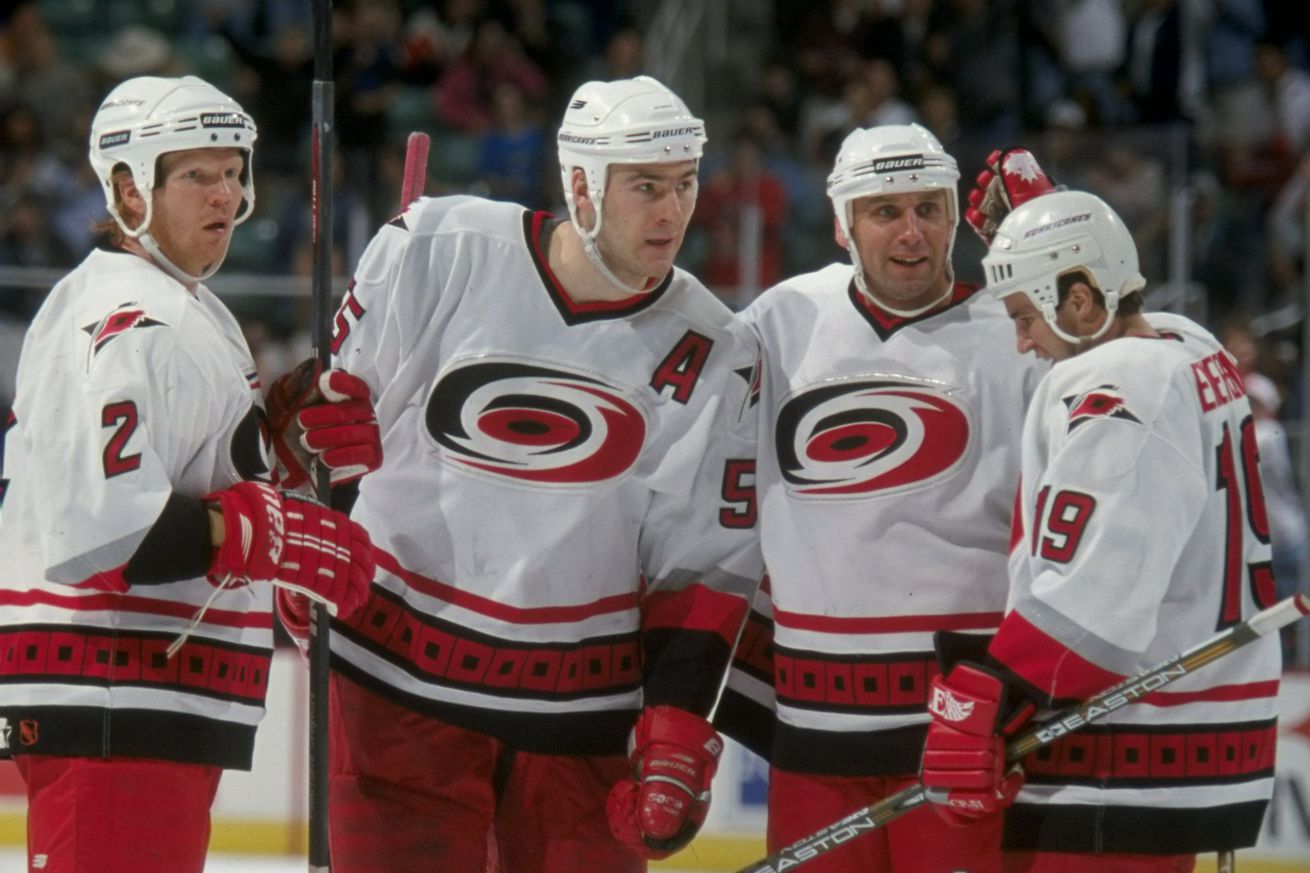 A trip all the way back to 1998 and the Carolina Hurricanes’ first playoff win since relocation.

Upon moving from Hartford to North Carolina, the Carolina Hurricanes failed to qualify for the playoffs in their first season, 1997-98.

The 1998-99 season however would see division realignment across the National Hockey League, moving the Hurricanes out of the Northeast Division and into the newly created Southeast Division, along with the Florida Panthers, Tampa Bay Lightning and Washington Capitals.

The ‘98-99 Hurricanes, still playing in Greensboro while awaiting the completion of construction in Raleigh, would finish with just 86 points, but win the Southeast Division. Thanks to the new division format that would earn the Hurricanes the third seed in the Eastern Conference and home ice advantage against a former Northeast Division foe, the Boston Bruins, in round one.

Boston shutout the Hurricanes in game one, 2-0, and, after a scoreless first period, would strike first again in the second contest.

Bruins goaltender Byron DaFoe swats away a Keith Primeau attempt all the way to the Bruins’ blue line. Boston winger Landon Wilson burns by Glen Wesley’s ill-advised pinch and drives into the Carolina zone. Wesley, with the aid of an obvious hook, recovers nicely and drives Wilson wide. But Wilson throws on the brakes and makes a nice cut back move to shoot far pad and generate a large rebound off of Arturs Irbe.

Future Hurricane Sergei Samsonov follows the play up and buries the rebound past the outstretched stick of defenseman Nolan Pratt.

About five minutes later, Carolina would respond as Martin Gelinas bursts into the offensive zone and leaves a drop pass for Ray Sheppard who beats DaFoe high glove.

Ray Bourque is forced to help cover Gelinas and allows Sheppard time and space to get off a shot from the top of the circle.

The game would move into the third period still deadlocked at one and would stay that way until Steve Heinze would find a loose puck trickling between Irbe’s legs.

Heinze had actually fallen down in the corner on the forecheck, but beats Sami Kapenen back to the net to follow up the Anson Carter shot.

Irbe has no idea the puck has squeaked through his pads and cannot react in time to make a play on the puck.

On the verge of dropping both games at home and heading to Boston down 0-2, Carolina would find a crucial equalizer with just over five minutes to play in regulation.

With the puck dumped in past a Bruins defenseman, a Boston winger, in this case Steve Heinze, is forced to retrieve the puck. Robert Kron pursues, and hooks, Heinze, creating a loose puck for Bates Battaglia to pick up and throw towards bodies at the net.

After stripping Heinze of the puck, Kron bursts back to the net and makes a beautiful deflection past DaFoe. The deflection effort is helped by the fact that Heinze has lost his stick off the skate of Hal Gill and cannot effectively check Kron’s stick.

The Kron equalizer would send the game into sudden death overtime. Deep into the first overtime period, the Bruins would get hemmed into their own zone. Unable to get fresh legs on the ice due to the long change, Boston defenseman Dave Ellett just wraps the puck around the boards hoping to clear, but the Bruin winger is pinched off by Primeau and the puck is held in by Steve Chaisson. Chaisson walks to the middle of the ice and steps into a slapshot that rebounds out to Gelinas. Gelinas’ attempt hits the post before Ray Sheppard finishes off the second rebound for his second goal of the night.

With the Bruins exhausted, the Carolina forwards go to work in front of the net without much resistance.

The victory marked the first, and only, postseason win in the Greensboro Coliseum. The Hurricanes would win game three in Boston before dropping games four, five and six to the Bruins.