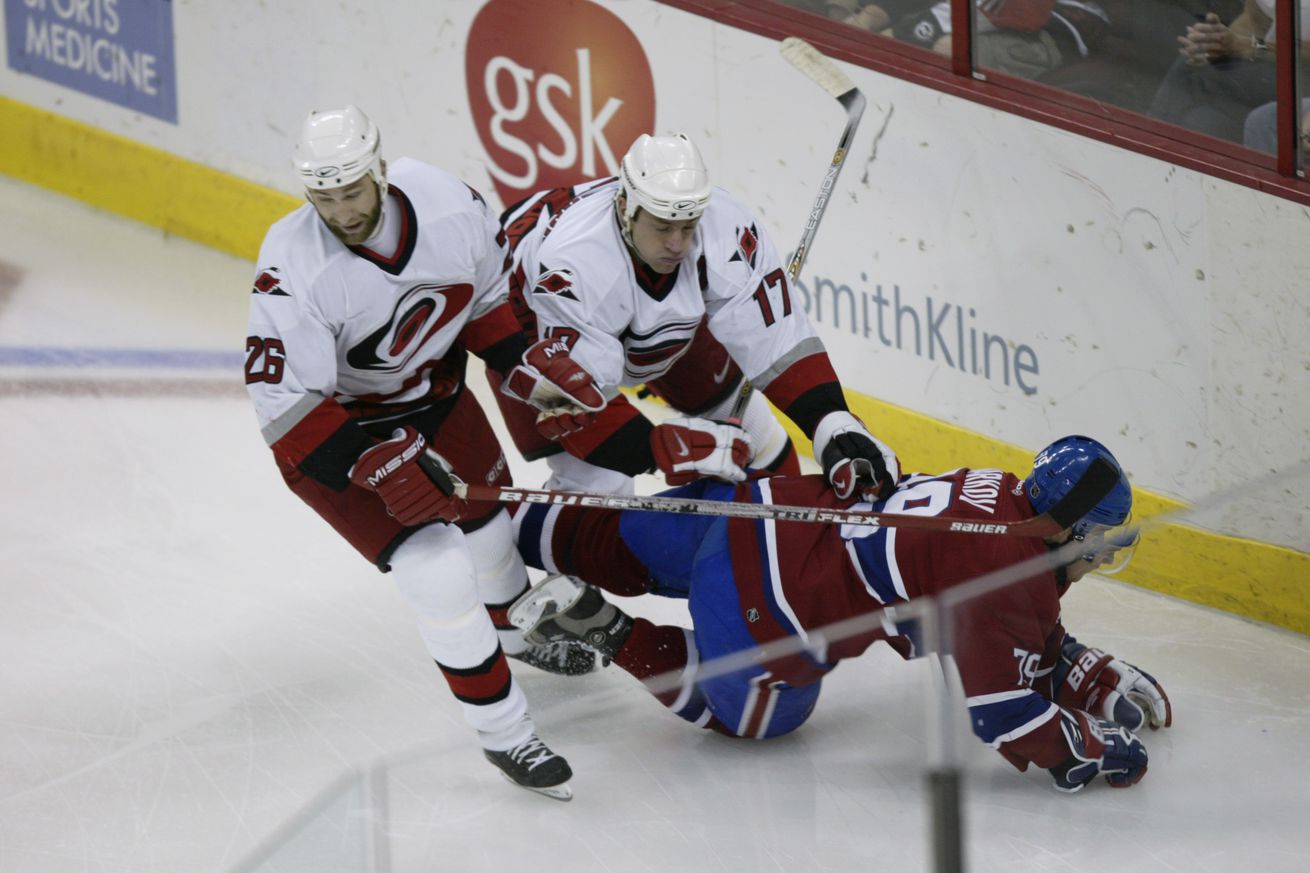 There are some big names remaining on the board as we reach the halfway point. Who gets their name called today?

The first two rounds of the Canes Country Ultimate Fantasy Draft had a couple of twists. As we go into rounds 3 and 4 today, the team-building strategies of our five drafters become more evident, but by the end of the day there are still some big names remaining on the board. Who will be selected today?

If you need a reminder of rules, check the top of yesterday’s post. Here are how the teams stack up from Day 1:

After getting Brind’Amour and Slavin I turned my focus to offense. With Jeff Skinner already off the board, I went with the next best scoring forward in Hurricanes history. Erik Cole not only brings the offense with his power forward style of play, he also brings leadership and a familiarity of playing with Brind’Amour as part of the famous BBC line in 2001-2002, a massive reason why the team made it to the Stanley Cup Final.

I was all set to take a different player (one I eventually wound up with) in this spot, then realized that Teravainen was still on the board and there was no chance he’d come back to me in the fourth round, so despite the fact I was still without a defenseman on the roster I needed to take Turbo here. I’m sure not complaining about having him and Aho as two-thirds of my top line, though.

I came at this pick from two angles. First, Kapanen was quick, winning two NHL All-Star Game Fastest Skater competitions, and an efficient scorer, with five 20+ goal seasons. The second angle was his chemistry with Francis. The pair made up a dominant part of the early era Hurricanes’ first line and was a huge driving force for the team’s early successes. That and, obviously, every team needs at least one or two Finns.

I probably would have gone goalie here, but Andrew had both picks in between this one and my next and he had already taken Cam Ward. O’Neill made sense here, adding a good goal-scoring winger to go along with Staal up front. I wanted Teravainen with this pick, but Brian scooped him up.

I knew waiting on a center was going to cost me, but I’m happy with the younger Staal. While his offensive numbers have tapered off in recent years, the overall body of work tells me 20-25 goals is a reasonable expectation, and I know I can always count on him to win a key faceoff, and shut down the other team’s top players. I’m a little concerned that his and Skinner’s games never meshed well, but my eventual second wing is going to solve that.

I had some hope for getting Hamilton or Slavin at my second turn, but Faulk is a fine consolation prize. Faulk is the all-time Hurricanes leader in both goals and points from a defenseman (and it’s not particularly close). He was a whipping boy for a lot of the tail end of the playoff drought, but his booming shot from the point, offensive instincts and underrated defensive game made him a great player for this team. His play for a good group in 2018-19 showed what he could do with some more help, and I’m confident in him leading my blue line.

There were six picks between this pick and my next one after it, so I went ahead and got Irbe assuming he wouldn’t be available for me in round five. Petr Mrazek and Martin Gerber went off the board shortly after, so I’m happy I got Irbe when I did.

OK, so Wallin is probably not the fifth best defenseman in team history. He may not even be top-ten. But, looking at my team makeup, I wanted a left-shot, defensive minded defenseman to stick on the blueline. A big body, with clutch playoff moments all tied up with the perfect ribbon of 69 career points as a Hurricane. I mean, what else can you say other than, “Nice pick.”

The run on goalies (such as it is) really got going when Alec took Irbe, and with apologies to the likes of Anton Khudobin and Curtis McElhinney, I had either Mrazek or Irbe targeted as my goalie. That meant I had to grab Petr here, which I’m fine with. I really think he’ll end up the second-best goalie in franchise history when his time in Carolina is done.

As it was becoming apparent that a run on goalies was taking place, and with the lack of quality depth at the goalie position in Hurricanes history, it felt like this was the time to grab a netminder. People tend to forget just how good Martin Gerber was in the 2005-2006 run because he was overshadowed in the playoffs by Cam Ward. But in reality, Gerber still ranks fifth all-time in Hurricanes history in wins when he only played here for one season. To put that into perspective, Kevin Weekes – who sits one win ahead of Gerber – took 119 games to get to 39 wins. Gerber got to 38 wins in just 60 games.