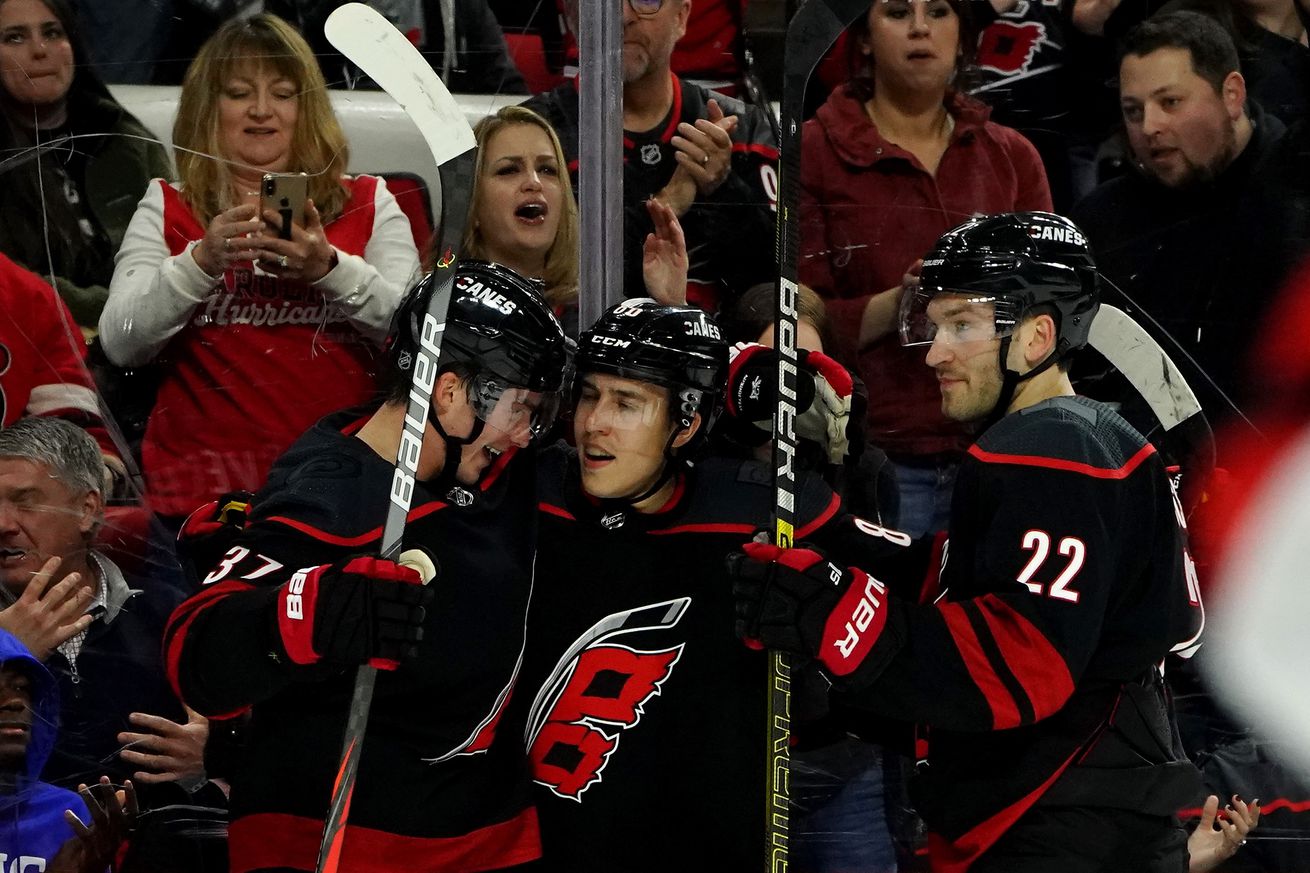 Rounds 5 and 6 are on the clock. Who will come off the board today, and who’s left to pick on the final day?

We are halfway home with the 2020 Canes Country Ultimate Fantasy Draft, and there are still plenty of big names on the board. Each of our drafters has four more slots available, two of which will be filled today. Where will the picks today take us?

If you need a reminder of rules, check the top of Monday’s post. Here are how the teams stack up after Day 2:

To be honest I was surprised that Svechnikov was still available at this point. Maybe it’s because his body of work is still so small, but anyone who can pull off not one, but two lacrosse goals in the NHL has my vote as one of the best in team history no matter how old they are! But in all seriousness, I think Svechnikov’s laser shot and his ability to score from just about anywhere makes him a great fit on a line with Cole and Brind’Amour. Those two can create space and Svechnikov can fire it home.

This is the player I was all set to take when I realized that I needed to grab Teravainen, and while I’m really not sold on him as a number-one defenseman, the truth is that with Slavin off the board no one fits that description. So I’ll go with the Robin to Slavin’s Batman, who would probably be a top-pairing defenseman on two-thirds of teams in the NHL anyway. I’m not super comfortable with it, especially given how weak it leaves me on the power play, but in the fifth round I think it’s a good value.

At this point, I knew I needed to build some credibility back so I went with the obvious choice and the current household name, Justin “Dad” Williams. Not only was he the captain the team desperately needed to right the ship in 2018-19, but he also has continued to be an effective scorer even into his high 30’s. Williams can produce, he’s competitive, he has the drive to win and when it’s all on the line, you know Mr. Game 7 is there to clutch it out.

I figured I’d solidify my blue line before getting a third forward to go along with Staal and O’Neill, and Hedican was a clear choice for me. I’m perfectly content with the idea of Wesley and Hedican paired together to hold things down for my squad. I thought for a second about Ray Whitney with this pick, but went Hedican instead.

I knew with a sniper in Skinner and a two-way, power center in Staal, I needed some playmaking here. Some creativity. Some Wizardry, if you will. I debated between Whitney and Cory Stillman, but I think Whitney’s playmaking was on par with Stillman’s, and he was a bit more creative overall. Whitney brings more to the table; he’s a much better goal scorer than Stillman in addition to his playmaking. The fact that Brian briefly booted me from the Zoom in a fit of rage told me I made the right choice here.

Another defenseman who probably doesn’t get enough credit for how good he was here. Most probably wouldn’t expect the oft-injured, smooth-skating Finn to still sit top five in points for Hurricanes defensemen, but he does. Pitkanen was great at skating the puck out of trouble, and the idea of him firing stretch passes up to Skinner and Whitney is enticing. I also like the idea of him running point in the offensive zone and on the power play, setting up the forwards down low or getting Faulk open to unleash his howitzer (and Pitkanen also had an underrated, rarely-used clapper). Pitkanen-Faulk was a pairing I always wanted to see, but the injury that ultimately ended Pitkanen’s career kept that from happening (I briefly entertained the idea of reuniting Faulk with Andrej Sekera to reignite their 2013-14 magic, but Pitkanen’s overall body of work was much better).

In doing research for this draft I learned that I absolutely did not want to be subjected to picking a Hartford Whalers head coach. None of them had good tenures in Connecticut. Like I did with Irbe in the fourth round, I figured I needed to jump the gun on my head coach before the long layoff in between picks. I love Brind’Amour as a head coach, so him over Maurice was an easy pick for me.

This was a personal favorite type of pick for me more than anything. I mean what wasn’t to like about Ruutu? He was charming, handsome, a good scorer and damn could he nail someone into the boards. Ruutu was a fan-favorite during his tenure in Raleigh and while it may have been short-lived, it was still quite fun to have him. Plus, the added grit on the team will be a welcome touch. P.S.S. The more Finns the merrier I say.

First, a hearty (blank) you to Andrew for taking two of the players I had eyes on back-to-back. He’s a real jerk. Anyway, I have a pure goal-scorer in Aho, and reminded of how well Stillman played with another goal-scoring center in 2006, I’m fine with him taking him here even if I’d have rather had Whitney. When he was traded away before the 2008 deadline, the role of playmaking wing on the roster went essentially dormant until the Hurricanes picked up Teravainen eight years later.

There are only but so many coaches in Hurricanes history – so few that we even extended the limits, allowing Whalers coaches to be picked. Paul Maurice is the winningest coach in Hurricanes history and when faced with the choice of him, Kirk Muller, or a certain someone we won’t mention by name, the pick was obvious.