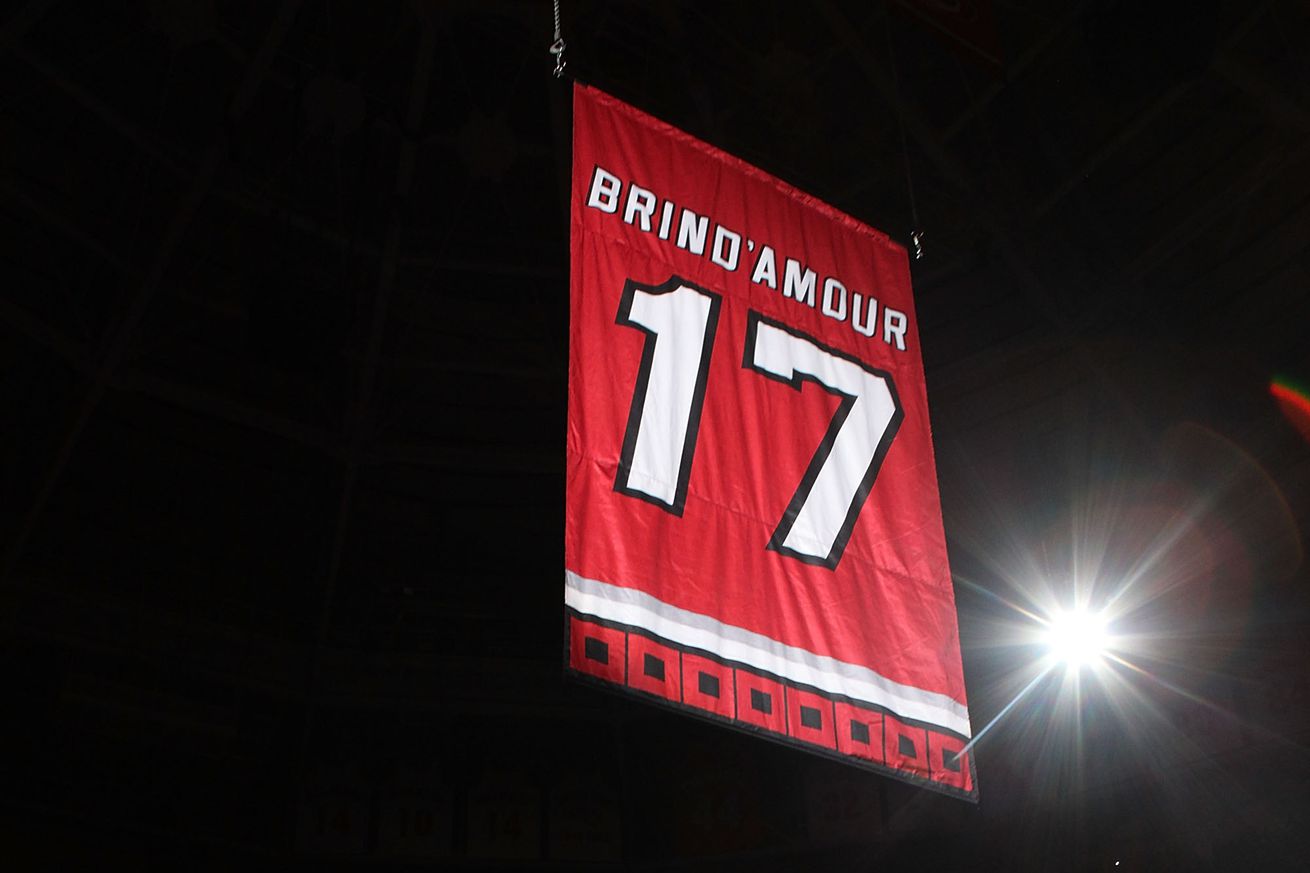 Another year, another inexcusable snub. When will the Hall of Fame finally see the light?

The following is the opinion of Canes Country as a site.

There are no good reasons Rod Brind’Amour should not have gotten the call from the Hockey Hall of Fame induction committee this afternoon. Yet the wait goes on.

But Brind’Amour’s exclusion from the recognition he deserves isn’t entirely about the tangible facts of his candidacy. It isn’t about the fact that he played on five conference finalists, or in three Stanley Cup Finals, or won two Selke trophies, or was universally admired by his teammates as one of the best locker-room leaders the game has ever seen, or, or, or.

It’s becoming more and more obvious that a large, if not the main, contributing factor to Brind’Amour’s interminable wait is that he played half of his career with the Carolina Hurricanes. Nothing more, nothing less.

The Hall’s eighteen-member induction committee is a who’s who of the proverbial 200 Hockey Men. (OK, 199, now that Cassie Campbell-Pascall is on the committee, but the point remains.) It’s the ultimate in-group, answerable to no one but themselves. Identifying the best and most impactful players in hockey history shouldn’t be a popularity contest, yet here we are. If you don’t have cheerleaders on the committee, you aren’t getting in.

But that’s only part of the problem. The Athletic’s mock selection committee, published in an article yesterday, pulls the curtain back: for someone to even be under consideration, one of the committee members needs to nominate him or her. It’s not like baseball, where players are automatically eligible five years after their retirement and only remain eligible if they are named on enough ballots.

In hockey, you don’t just need cheerleaders on the committee to be elected. You need cheerleaders to simply get on the ballot in the first place. Inexplicably, no one bothered to raise Brind’Amour’s name in the deliberations of the mock committee, so he was ineligible for consideration.

Imagine if the Baseball Hall of Fame decided they just wouldn’t consider enshrining Larry Walker for whatever reason, and there was no recourse. Walker famously got in on his last shot this year. Brind’Amour isn’t up against the clock, but what’s the delay?

So when you have an insular committee making the decisions, one which famously does not allow any leaks of their deliberations nor even release the voting percentages, it becomes a question of who you know. It turns it into a popularity contest rather than a true deliberation of the best of the best.

We’ve gotten deep into this column without a mention of Guy Carbonneau, a similar player to Brind’Amour who made the cut last year. Carbonneau spent the majority of his career with the Montreal Canadiens. Is there any doubt – any doubt whatsoever – that if Brind’Amour had been traded to a team that was not the Hurricanes, he’d long since have been inducted?

Daniel Alfredsson? Jere Lehtinen? Steve Larmer? Henrik Zetterberg, a year from now? What do all these players, contemporaries of Brind’Amour’s to varying extents, bring to the Hall table that Brind’Amour himself doesn’t? Excluding him from the conversation altogether almost feels like an intentional troll job.

News flash: if Marian Hossa had played 16 seasons in Atlanta and three elsewhere, instead of the other way around, there’s no way the conversation today is whether or not he deserved to be elected to the Hall on the first ballot, which he inexplicably was; it would be whether he would get in at all.

Reasonable people can disagree on whether Brind’Amour deserves to be enshrined. Our opinion is obvious. But to not even mention him on the shortlist is a slap in the face, not only to him, but to the Hurricanes as an organization.

But this is par for the course for the Hurricanes’ reputation across the league. It’s only with the rise of advanced statistics that the Hurricanes have gotten their due, and even then it’s been grudging acceptance rather than full-throated embrace. This is a franchise which in 2006 saw the preeminent hockey voice on a major American sports network compare its recently-retired captain, a first-ballot Hall of Famer himself, with Bernie Federko.

It’s a franchise that’s seen its crowning achievement, the 2006 Stanley Cup, derided as a fluke. While in the grand scheme of things the 2006 Hurricanes were far from a dynasty, even in the new reality of the post-lockout NHL it still took sixteen wins to claim the championship, same as any other team since 1980.

It’s a franchise that had a Sports Illustrated article written about it less than a month after the start of the Hurricanes’ first season in North Carolina entitled “Natural Disaster,” featuring shots at everything from the 160-mile round trip to Greensboro for home games to the Raleigh restaurant scene to – and this is not a joke – an overly fawning press that is loath to criticize the team.

It’s a franchise that knocked on the door of a decade without a playoff appearance, only to be powered back to relevance in large part by the hard work of the very man whose Hall of Fame bonafides should be beyond question.

“It’s just the Hurricanes.” Yeah, it is just the Hurricanes, an NHL franchise just like any other, and one embodied by a player whose career report card should be more than enough validation, only to be denied the recognition he deserves because of what appears to be nothing more than gatekeeping ignorance and/or arrogance.

It’s past time. Rod Brind’Amour spent a good portion of his career in a place many hockey lifers might prefer never had a team in the first place. But that shouldn’t be a reason to force him to clear any more hurdles than anyone else. He did enough. He is enough. Let him in.