New Carolina Panthers offensive lineman Ikem Ekwonu seems pretty happy that he’s staying home in Charlotte. And he may have the Houston Texans and New York Jets, in part, to thank for that.

General manager Scott Fitterer, the famed draft-pick merchant himself, was featured on Monday’s episode of Movin’ the Chains on SiriusXM NFL Radio. When covering what went down this past weekend, particularly about how he and the team landed on Ekwonu, he told hosts Pat Kirwan and Jim Miller that the chance to wheel and deal with the sixth overall pick was very much alive.

That prospect died, however, when a pair of cornerbacks were scooped up before the Panthers hit the clock.

Scott Fitterer on @SiriusXMNFL: “we had 3 really good offers” for the 6th overall pick. Says those teams were going for corners, and when they came off the board, that ended that.

Those corners, of course, were Derek Stingley Jr. of Louisiana State University and Ahmad “Sauce” Gardner of the University of Cincinnati. After the draft started with a pair of pass rushers in Travon Walker and Aidan Hutchinson, Stingley Jr. and Garnder went third and fourth overall—respectively—to the Texans and Jets.

Two picks later, Carolina took their guy Ickey and him the first offensive player to have his name called on Thursday night. So even though Fitterer might’ve had that itch to trade down, it was probably scratched by the fact that they may have finally gotten their franchise left tackle.

Ikem Ekwonu was the ‘best-case scenario’ for Panthers

Watch Ikem Ekwonu get his draft call from the Panthers 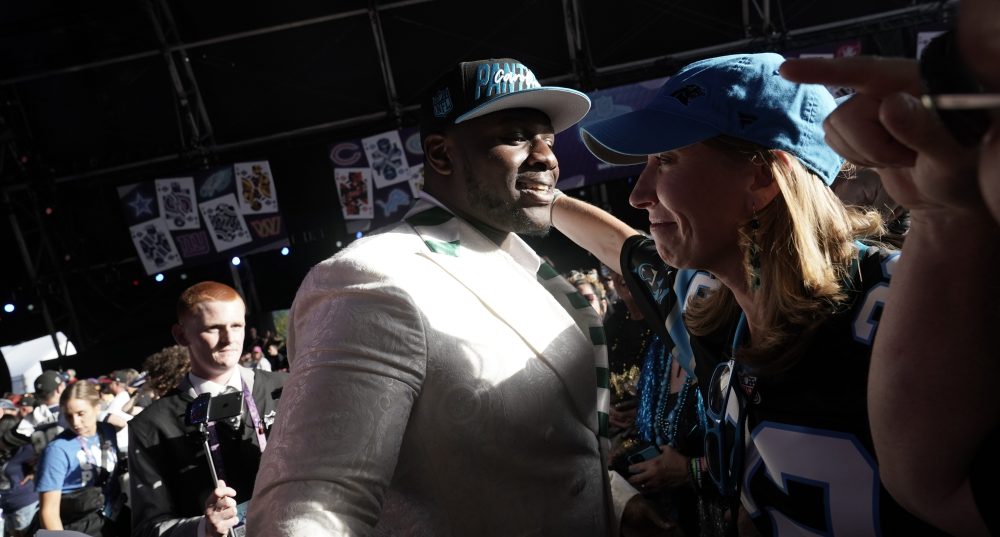