Last month, seventh-round pick Tommy Stevens found himself in the headlines after a strange tug-of-war between the Saints and Panthers. The Saints, after trading away their entire Day 3 haul, hoped to sign the Mississippi State quarterback as an undrafted free agent. The Saints and Panthers reportedly wound up in a bidding war for him before the conclusion of the draft, prompting Sean Payton to trade back into the draft to nab Stevens at No. 240 overall. 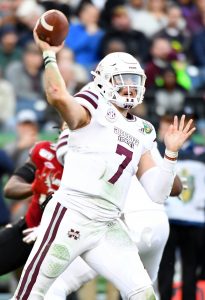 It seems that both teams violated league rules which allow for teams to chat with potential UDFAs before the draft is over, but forbid actual negotiations. For his part, Panthers GM Marty Hurney says he did not do anything “out of bounds”.

“That’s not — what we did is we did have several conversations with Tommy before the draft. He had history with [offensive coordinator] Joe Brady (at Penn State). We thought that if we didn’t have a chance to draft him that he was one of the guys on our list. But it didn’t go any further than that,” Hurney said (via Joe Person of The Athletic).

The league may or may not agree after completing an investigation into the matter. If the Saints and/or Panthers are found to have violated league rules, they could be penalized with fines or the forfeiture of future draft picks.