The Panthers have released tight end Seth DeValve with a non-football injury designation, according to Field Yates of ESPN.com. 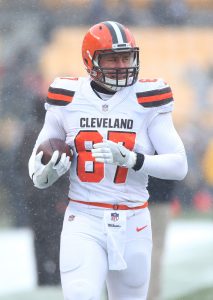 Signed to a one-year deal by Carolina in March, DeValve theoretically could have played a role with the Panthers had he been able to stick on the roster. Carolina released franchise icon Greg Olsen earlier this year, leaving Ian Thomas as the top tight end on the Panthers’ depth chart.

DeValve, 27, played the most snaps of any tight end in Jacksonville last year, but caught only 12 passes for 140 yards in an offense that didn’t prioritize the tight end. Prior to joining the Jaguars, DeValve spent three seasons with the Browns. The Princeton product’s best campaign came in 2017, when he managed 33 receptions for 395 yards.

DeValve inked a veteran minimum pact with the Panthers, so Carolina is only on the hook for $137K in dead money. Meanwhile, DeValve will hit a free agent tight end market that also includes Delanie Walker, Jordan Reed, and Geoff Swaim.