Cam Newton is no longer a Panther. I know. It’s hard to say, much less type. There is a new regime in Carolina, and we can debate whether their actions have been fair, smart, or whichever adjective you prefer. I understand the anger, frustration and general confusion, and all I ask is that if you are reading this to do so with an open mind, and with an eye towards the future. I get it, I hear you, but if we are honest there are sound and logical reasons that this thing has gone down the way that it has. This is my attempt to make sense of the somewhat senseless. 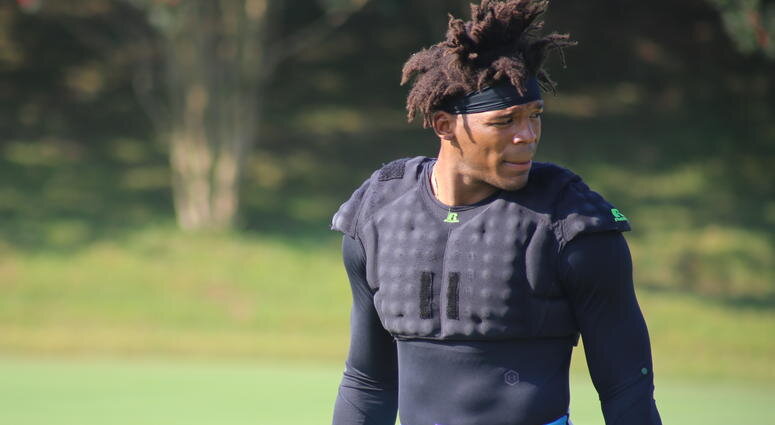 Coming off the 2015 season, the entire Panther universe was riding on an incredible high. The team had made its second Super Bowl appearance in its twenty-year existence. They had an MVP quarterback, a 15-1 record, and a now two-time coach of the year. The expectations were at an all-time high for 2016. In hindsight, 2015 was magic. It was the kind of season that any sports fan dreams of for their team and, just like with any dream, you ultimately wake up. The alarm clock was the 2016 season. Injuries abounded, and the undermanned team sputtered to a 6-10 record. The promise of 2015 was met with the sobering reality of where the team truly was from a talent standpoint. The worst came in a late-season game against the Chargers, and we all know the play that I’m speaking of.  Late in the game with the Panthers driving, Cam threw an interception and, attempting a pick-six saving tackle, he fell awkwardly on his shoulder. In true Cam fashion, he bounced up and pretended he was okay, but he wasn’t, and the clock started on the end of an era.

The first hints of trouble began in the 2016-2017 offseason. The team announced that Cam needed surgery for a partially torn rotator cuff. All signs pointed to a full recovery and return to form for Cam in 2017, and the results seemed promising. The team went 11-5 and secured a playoff berth and, with a little more effort from Devin Funchess, the Panthers should have beat the Saints on the road in the Wild Card round. The disappointment wasn’t a surprise out of nowhere. There had been hints of trouble throughout 2017. Sure, Cam still threw the deep ball, but not nearly as much or as effectively as he had in the past.  Those concerns were again highlighted in the 2018 season, where Cam would even begin getting pulled to throw Hail Marys even as the team remained mum on lingering complications from the shoulder surgery. 2018 was again a letdown of a season. The team started 6-2 before Cam’s health deteriorated and, with it, the team’s season withered. Again in the 2018-2019 offseason, he underwent a second shoulder procedure.

The turning point was May 16, 2018 when hedge fund billionaire David Tepper bought the team, which immediately raised a host of questions. Who and what were in the long-term plans? Were Ron Rivera’s days numbered? Most importantly, how did Cam Newton figure into all of this? Those questions slowly began to be answered throughout 2018. When Cam’s health again faltered in 2019, the path forward increased in peril. An 0-2 start and a season ending Lisfranc injury on the heels of performances that suggested that he was still suffering complications from the second procedure made these questions even more pressing. The penultimate moment came when the team fired Ron Rivera and, by all intents and purposes, ignited the end of an era.

For a moment, let’s try to see this from Tepper’s perspective. He, at this point, had owned the team for two seasons, both of which had unraveled due to injuries to Cam and lack of adaptation from Ron Rivera. Let’s say that you own a McDonald’s franchise. You spent all this money to buy the building and the franchising rights, but yet there are two issues that continue to cause business to tank (no pun intended). The first issue is that the general manager that came with the store before you bought, who just refuses to adapt to the changes and upgrades that you want to make. It finally comes to an impasse, to the point where you have to tell him how to make the schedule and who should be on the grill. We can argue whether Rhule was the right guy for the job, but the decisions leading to his hiring should not be in question, no matter what coach speak he speaks at the combine. More on that later.

The other major concern: what did Rivera’s firing and Rhule’s hiring mean for Cam Newton? Let’s revisit the McDonalds analogy.  The general manager has been replaced, but now the team lead is constantly calling out of work sick. It’s not their fault, they have just had a rotten run of luck and can’t seem to stay healthy. Not only are they not able to work, but there is a rumor that they may want a raise. Hopefully we can agree that it wouldn’t be a wise investment to give said raise. So what would you do? It would probably be something like what the Panthers did with Cam. While I completely agree that it could have been handled better from a PR standpoint, I’m not sure I agree that they ‘tanked’ his trade value. Teams across the league were most likely not willing to give draft assets or capital to trade for a QB who has had a two year battle with a shoulder injury. Especially if the rumors are true and Cam wanted a new deal, which he absolutely should have. The move to release Cam has understandably been the powder keg that has caused Panther nation to explode into a rage, confusion, and sadness filled hurricane. I get it, I hear you, but the decision itself is understandable.

I know what you’re saying: “But they lied to us! Matt Rhule said he would love to coach Cam!” I get the confusion and anger…but did Rhule or Tepper really lie? As far back as during the season, the media around the team were already alluding to a separation from Cam Newton in the offseason. Those reports don’t just spring up out of nowhere; in hindsight, they were preparing the fan base for the inevitable split. Whenever a report would come down that the Panthers were still planning to move on from Cam, Panther nation would take to the Twitter streets with pitchfork in hand to battle whoever had reported it. Even Ian Rapoport who, along with Adam Schefter, is the best NFL reporter out there wasn’t immune.  The most reliable reporter in NFL media was burned from the rage-fueled fire that is Panther Nation, and it led me to a conclusion. We must face the facts. We are what we are as a fan base. We are the kids thrust in the middle of a nasty divorce! We were hoping that Dad wouldn’t move out, but now all his clothes are gone, and he is staying at the motel across town. To top it off, Mom has a new boyfriend named Teddy who wasted no time moving in and kicking his feet up on the sofa. I joke, but at the same time, I feel like all the hostility is a bit misplaced. We weren’t lied to, we were told as far back as October that it was a very real possibility and, being fans, hoped that it wasn’t true. But it was, and now we are picking up the pieces and will be for some time.

Lastly, I would just ask to give this new regime a chance. They clearly already have a different approach to team-building than what we have been used to for the last twenty-five years. Prioritizing skill players, and at least attempting to address the left tackle issue. I know, I know, but they never did that for Cam! Again, this is a brand new organization and we shouldn’t hold them to the same standard as past regimes, nor should we criticize them for past sins. It feels like a time to be excited. It could fail fantastically. It could come crashing to the ground two years from now in a deafening thud, and Matt Rhule could be ushered out the back door of BoA. It could go that way, but what if it doesn’t? What if in two years they are competing with a team of young talented players on affordable contracts. Sound impossible? It’s not, and the decisions of 2020 will have led them there. I understand the anger now, but I hope that, if it goes the way we all hope, it can serve as a balm to soothe the sting for those of us who have felt spurned from the release of Cam Newton. I know it’s a long row to hoe over the next two years, but it’s going to take all of us to get there.