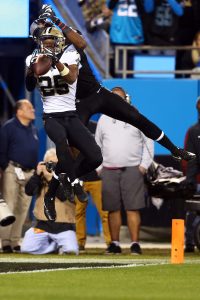 Apple and the Panthers agreed to a one-year deal, according to Joe Person of The Athletic (on Twitter). This will help fill the void James Bradberry created when he defected to the Giants in March. A former Giants first-round pick, Apple will have a clear track to a starting job with the Panthers.

During one of the most defense-heavy drafts in NFL history, Carolina did select two corners. But the team did not address this position until the fourth round. Prior to Apple, the Panthers had not made a notable free agent investment at corner this offseason, either. Pro Football Focus graded none of Carolina’s incumbent corners higher than 89th at the position last season. Donte Jackson, a 2018 second-rounder, resides as the Panthers’ top cornerback holdover. Bradberry had served as Carolina’s No. 1 corner throughout his career.

Apple, 24, agreed to a one-year, $6MM Raiders pact in March. But on April 2, the former Ohio State standout returned to free agency. This takes one of free agency’s top corners off the market, though the likes of Logan Ryan and Darqueze Dennard remain unsigned.

The Giants traded Apple to the Saints during the 2018 season, and he delivered more stable work in New Orleans after a rocky tenure in New York. Apple started 25 games for the Saints. He will follow Teddy Bridgewater east to be part of Matt Rhule‘s rebuild effort.