A high-ankle sprain and uncreative offensive may have limited his production in his second NFL season, but there’s a very real chance that Saquon Barkley explodes and is one of the most valuable weapons in the sport in 2020.

Just two seasons ago, Barkley had one of the best rookie seasons in NFL history, rushing for 1,307 yards on 5.0 yards per carry and catching 91 passes for good measure. If that was just the former No. 2 overall pick scratching the surface of what he could do in the NFL, he could ultimately be one of the greatest players at his position in the history of the league.

Even though he was a high first-round pick, Barkley will be the 19th highest-paid running back in the NFL in 2020, as the 23-year-old is set to make $3.4 million in his third NFL season. If he emerges as one of the game’s elite players in 2020, there’s a very good chance that he’ll seek a new deal, as Ezekiel Elliott and Christian McCaffrey have successfully done after monster third seasons.

For now, Barkley is underpaid relative to the production that he’s likely to put up. Here’s a look at the 10 running backs that will take home the most money in 2020: 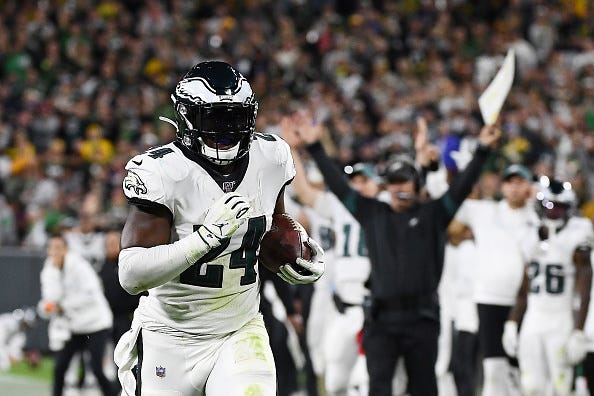 Before a mysterious shoulder injury that essentially made the second half of his 2019 season a wash, Howard was providing an excellent change-of-pace from star rookie Miles Sanders. In parts of 10 games, Howard had racked up 525 rushing yards on 4.4 yards per carry.

While not a weapon in the passing game, Howard has consistently been undervalued as a rusher between his time with the Chicago Bears and Eagles. In four NFL seasons, Howard has twice rushed for over 1,000 yards and racked up 30 rushing touchdowns.

He’ll head to Miami for his age-26 season after signing a two-year/$9.75 million free-agent deal with the Dolphins. Though the Dolphins also acquired Matt Breida from the San Francisco 49ers in a trade, Howard should see plenty of carries in 2020 as the team eases No. 5 overall pick Tua Tagovailoa into the NFL. 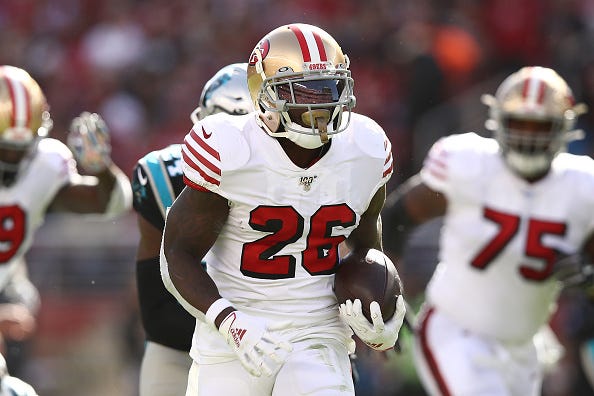 Lost behind breakout seasons from Raheem Mostert and Matt Breida, Coleman had a relatively underwhelming first season with the 49ers, rushing for 544 yards and racking up 180 receiving yards in 2019.

However, the second season of Coleman’s two-year/$8.5 million contract figures to see him get more than the 137 carries and 21 receptions that he had a season ago. Mostert is still in the picture, but the 49ers traded Breida, theoretically clearing the way for a bigger workload for Coleman. Then again, the Shanahan’s have a history of making stars out of running backs that previously were unknowns, so who knows.

In 2016, Kyle Shanahan’s final season as the Atlanta Falcons’ offensive coordinator, Coleman rushed for 520 yards and tallied 421 receiving yards. That perhaps offers a glimpse into how effective the 27-year-old could be with an expanded role in 2020. 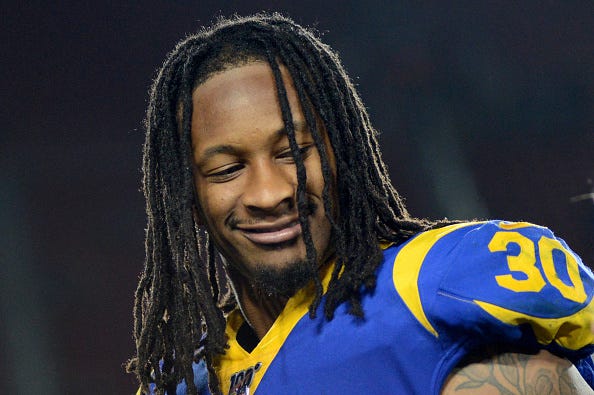 After being released by the Los Angeles Rams, Gurley latched on with the Atlanta Falcons, who moved on from Devonta Freeman this past offseason. Having played his college ball at Georgia, Gurley is very familiar with the peach state. Perhaps some home cooking will help him have a bounce back season.

Of course, as Falcons’ offensive coordinator Dirk Koetter not-so-wisely admitted, we don’t have a great grasp on just how much Gurley has left physically right now. Any attempts that Sean McVay made to manage his arthritic knee proved disastrous in 2019, as he ran for just 857 yards in his final season with the Rams.

Gurley was an All-Pro in 2017 and 2018, displaying Hall of Fame-caliber talent. Chances are, he won’t ever duplicate that production again. It will be interesting to see just how effective Gurley, who will turn 26 in August, can be with a full workload in 2020. 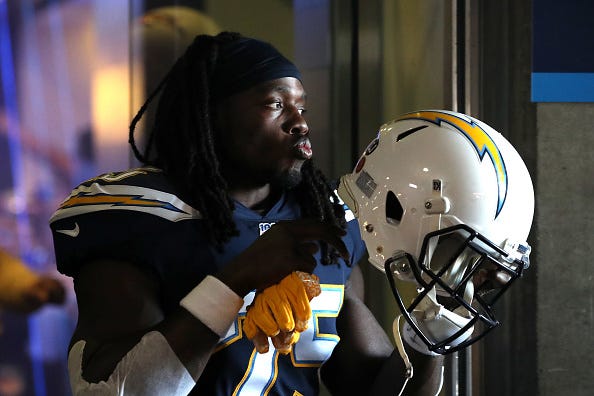 Gordon held out for the first quarter of the 2019 season hoping he would get a new contract from the Los Angeles Chargers. That didn’t happen, and when he finally ended his holdout, he regressed to averaging just 3.8 yards per carry in what proved to be his final season with the Chargers.

Ultimately, the 27-year-old was able to secure a two-year/$16 million free-agent deal from the division-rival Denver Broncos. He’ll pair up in the backfield with Phillip Lindsay, in an offense that used its first two draft picks on wide receivers Jerry Jeudy and K.J. Hamler. If second-year quarterback Drew Lock continues to play at the level he showed in his five starts a season ago, the Broncos should have a very good offense in 2020.

Remember, just two years ago, Gordon averaged 5.1 yards per carry in 12 games for the Chargers. Without having to worry about his contractual situation, Gordon should thrive in his first season in Denver. 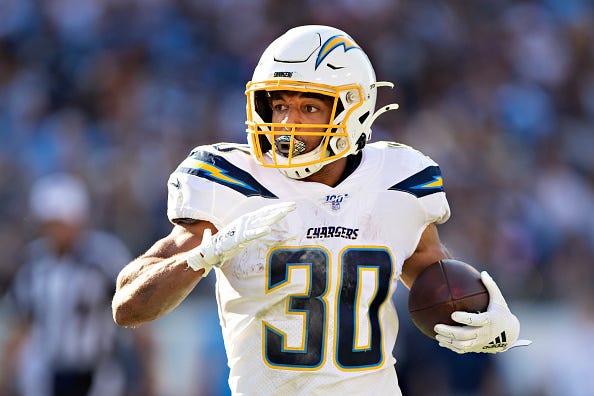 Ekeler broke out in the absence of Melvin Gordon early in the 2020 season and turned that into a new four-year/$24.5 million deal guarantees him $15 million.

The 25-year-old was one of the most complete running backs in the NFL in 2019, averaging 4.2 yards per carry and hauling in 92 passes for 993 yards. He and a healthy Justin Jackson could potentially form one of the league’s best one-two punches in the backfield in 2020.

After a disappointing 2019 campaign, the Chargers turned the page on the Philip Rivers era. Despite being just two years removed from a 12-4 season, head coach Anthony Lynn is likely on the hot seat entering the 2020 season. Whether it’s Tyrod Taylor, Justin Herbert or some combination at quarterback, expect him to lean heavily on Ekeler and his running game. 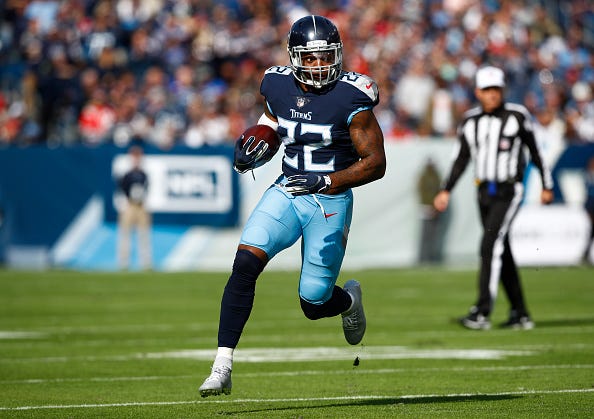 From Week 10 on, Henry went on one of the greatest tears in NFL history, rushing for 1,342 yards in nine games and leading the Titans to a surprise AFC Championship Game appearance.

Even though he carried the ball over 300 times during the 2019 regular season, we’re not going to bet against Henry having another monster season in 2020, especially when you consider he hasn’t secured a long-term payday yet. 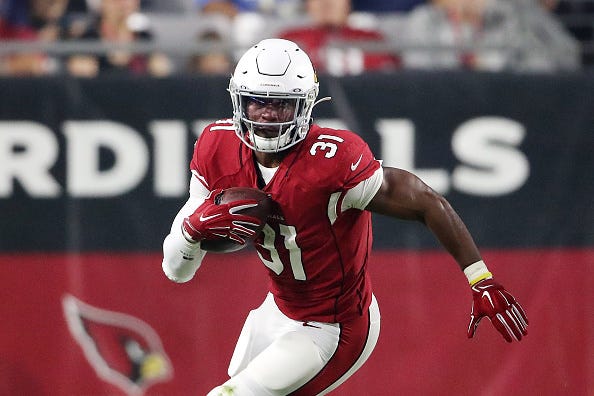 Johnson, a former All-Pro, seemed untradable because of his contract at the outset of the offseason. He ended up being traded to the Houston Texas, along with a second-round pick, as the Arizona Cardinals acquired superstar wide receiver DeAndre Hopkins.

Perhaps Bill O’Brien knows something we don’t, but Johnson has never been able to replicate his 2016 season, where he rushed for 1,239 yards and added in 879 receiving yards. He tore his ACL early in the 2017 season and has averaged less than four yards per carry over the past two seasons.

We know Deshaun Watson is one of the five best quarterbacks in the sport. It’s hard to know what to make of Johnson, Duke Johnson, Will Fuller V, Brandin Cooks, Randall Cobb and the weapons that have been placed around him. 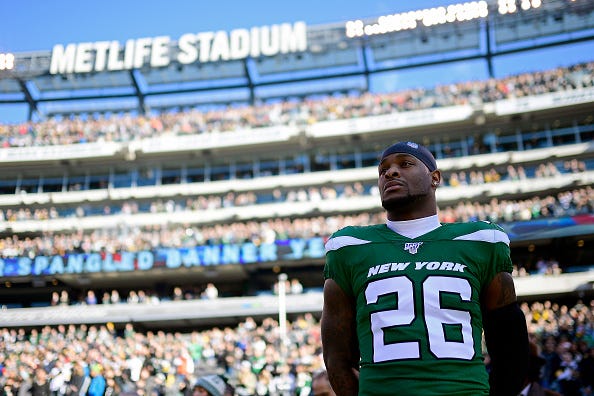 After Adam Gase won a power struggle over former Jets’ general manager Mike Maccagnan, Manish Mehta of The New York Daily News reported that Gase was not a fan of the four-year/$52 million contract that the Jets inked Bell to in free agency before the 2019 season.

All sides may have some remorse about the pact, as Bell had the worst season of his career in 2019, rushing for just 3.2 yards per carry in an offense that had disastrous quarterback and offensive line play for parts of the season. When you consider that Bell sat out the 2018 season and he attempted to fight for a new contract with the Pittsburgh Steelers, it’s been quite a while since he last performed at an elite level.

The Jets have an out in Bell’s contract after 2020, but ironically Gase may need Bell to have a bounce-back season to avoid being dismissed as head coach. 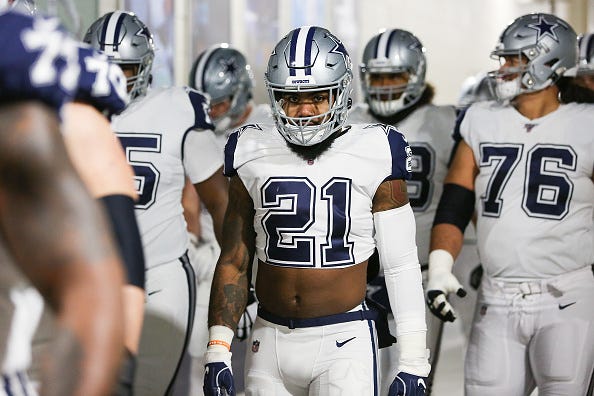 Ezekiel Elliott has been one of this era’s best running backs. Photo credit (Adam Glanzman/Getty Images)

Elliott held out until just before Week 1 last year, a tactic that worked to land him a six-year/$90 million deal that guaranteed him over $50 million. However, missing training camp and all of the preseason certainly contributed to a slight dip in production in 2019.

Then again, Elliott has had such a dominant start to his career that rushing for 1,357 yards on 4.5 yards per carry felt like an underwhelming season by his standards. For anyone else, that would be a career year.

This time around, there’s uncertainty about quarterback Dak Prescott, who the Cowboys haven’t yet been able to sign to a long-term deal since placing the franchise tag on him. With Prescott not present for virtual meetings with new head coach Mike McCarthy thus far, the team may be inclined to lean on Elliott early on in the 2020 season. 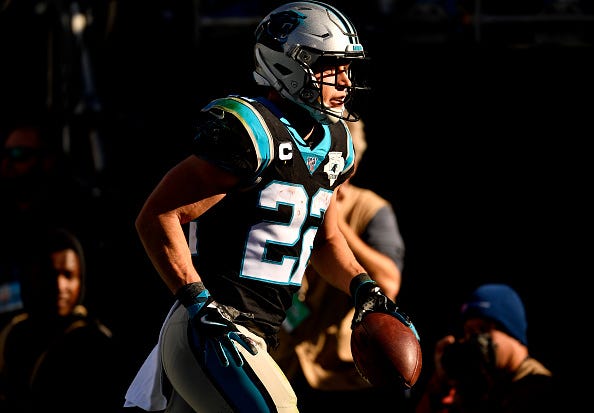 With the retirement of Luke Kuechly and the release of former MVP Cam Newton, the Matt Rhule regime almost didn’t have a choice but to lock Christian McCaffrey up long-term deal as it looks to win over the Panthers’ fanbase.

The 23-year-old was an All-Pro in 2019, turning in one of the most complete seasons a running back has ever had. Not only did McCaffrey rush for 1,387 yards, but he hauled in 116 passes for 1,005 yards. The Panthers’ 2019 season was pretty disastrous, which is unfortunate when you consider how dominant McCaffrey was in his third NFL season.

In April, the Panthers locked McCaffrey up with a four-year/$64 million extension. While he’ll carry just a $7.794 cap hit in 2020, he’ll take home over $22 million in his fourth NFL season.