Dabo Swinney’s wife Kathleen Swinney and the couple’s three kids are a big part of Clemson’s program. Dabo preaches family at Clemson and his wife and kids have played key roles in helping the Tigers coach instill this value to the team. Dabo joked before the season that he is glad Kathleen did not have the opportunity to enter the transfer portal referencing some of the challenges they encountered as a young married couple.

“There’s always going to be adversity,” Dabo noted, per Tiger Net. “I was kidding the other day with our media that I’m glad my wife didn’t tell me she was going into the portal for six weeks and see what her options were. She might not come back. She might have left me a long time ago. Way back because we had a lot of challenges like anybody married young. I was married at 24. But 25 years later, we’re going strong.”

Two of the couple’s sons, Will and Drew, are part of Clemson’s roster. Will had a number of other offers including Western Carolina, Newberry and Elon, per 247Sports. Will opted to go to Clemson as a preferred walk-on but just wants to be treated like any other player.

Kathleen on Life as Clemson’s First Lady: “This Is the Only Life I’ve Ever Known”

When you are the family member of a college football coach, life can a be bit different given the responsibilities that come with the profession. The success Clemson has had in recent years means Kathleen and the family often spend Christmas at a hotel given the schedule of the College Football Playoff. Kathleen noted that she has gotten used to life as part of a big-time college football program.

“This is the only life I’ve ever known,” Kathleen told the Post and Courier. “You get to know the players and you just love them. You spend time together, and I think that’s what’s important in any relationship.”

Dabo & Kathleen Have Known Each Other Since Elementary School

Dabo and Kathleen have known each other since elementary school where they grew up together in Pelham, Alabama, per The Clemson Insider. Dabo overcame a difficult upbringing as his father battled alcoholism, and it was Kathleen that stuck with him in high school throughout his family’s instability.

“He has been my best friend since I can remember,” Kathleen said, per The Clemson Insider. “I can’t remember my life without him. I really can’t. I don’t know what life is like without him in it. I guess a lot of people meet their spouse in college or out of college or maybe even high school, but I don’t know anything but him being in my life. I’m really blessed.” 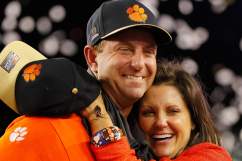