Zion Williamson is projected to make $8.1 million in his rookie NBA season with the Pelicans, per Real GM. Williamson’s contract is technically a two-year deal for $19.97 million, per Spotrac. This is the guaranteed portion of the contract, but most teams exercise the team options for the third and fourth seasons for top picks.

Williamson’s contract is technically labeled a two-year deal like the other first round picks, but it is hard to imagine the Pelicans not picking up the team options for the third and fourth year. There is a qualifying offer listed for the fifth year, but this amount is waived if a player signs an extension. NBA.com detailed how the option years work for the contract.

Option years cannot have a lower salary than the previous season.

Williamson will likely find himself earning more money off the court than he does for the Pelicans, at least through his rookie contract. Williamson is one of the most marketable players we have seen enter the NBA draft and is already a household name thanks to his time at Duke.

Where Williamson can make the most money is with his shoe deal, and the No. 1 pick has yet to announce which company he is signing with. Williamson’s shoes have been in the news since his famous blowout against North Carolina causing Nike to send a team of people to Duke to build a custom shoe for the big man going forward. ESPN’s Nick DePaula reported that several people in the shoe industry expect Williamson’s deal to eclipse $100 million.

“In my lifetime, I think it’s going to be the biggest bidding war ever done,” former sneaker executive Sonny Vaccaro said. “I would put them all on go.”

Vaccaro signed Michael Jordan at Nike in 1984 and later looked to offer James a $100 million contract at Adidas. Sources at multiple brands across the industry expect Williamson’s deal to reach that astronomical tier

While Williamson may earn a good portion of his future earnings from a shoe company, the Pelicans big man is also going to be pursued by a number of other brands for endorsement deals. If Williamson’s play on the court can match the expectations heading into the NBA, the No. 1 pick has a chance to build a business empire. 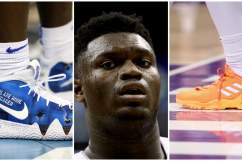