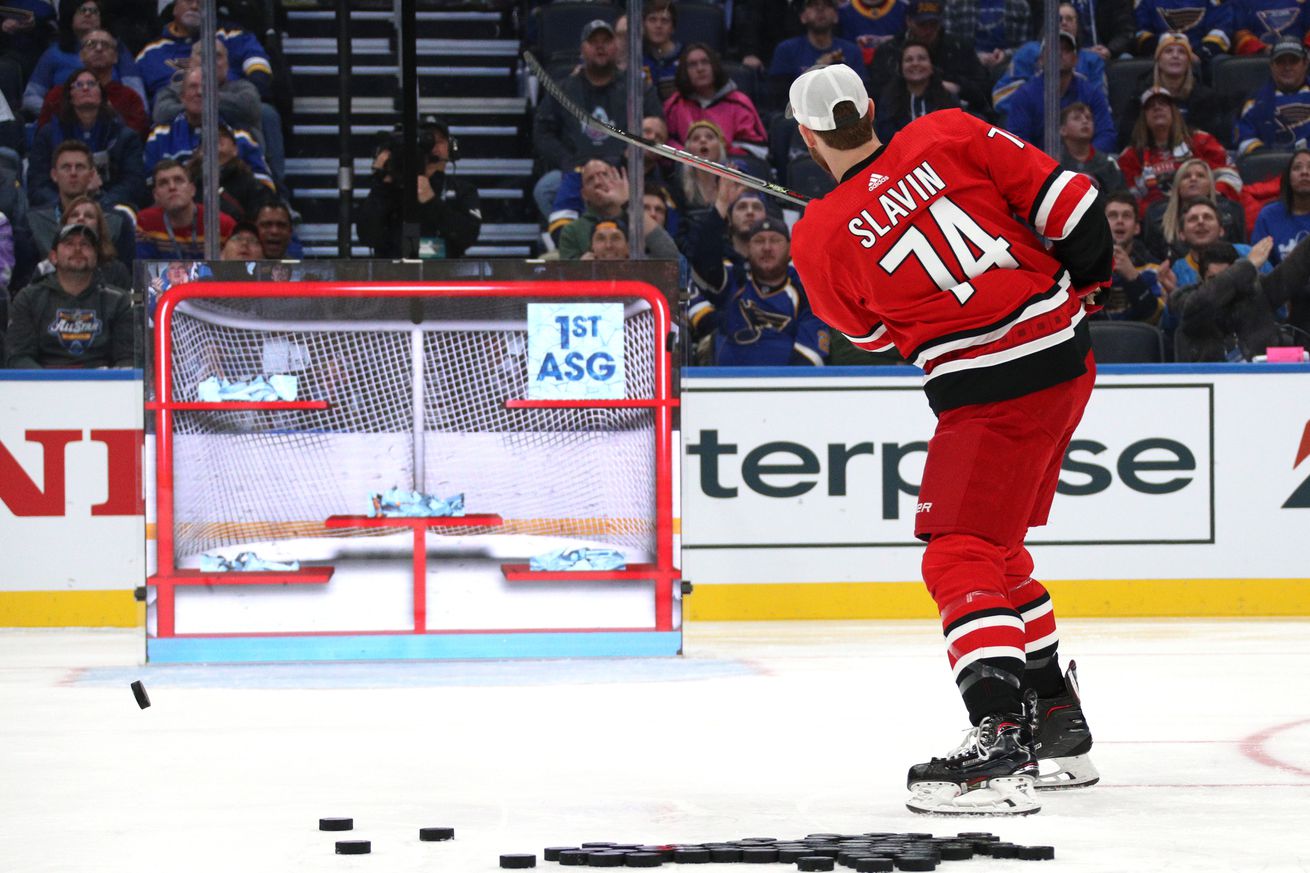 The second C stands for anything and everything because Jaccob Slavin can do it all.

Where do you even begin with a review of Jaccob Slavin? Slavin had already become the number one defenseman for the Carolina Hurricanes and this season he was given the chance to play the majority of the season with Dougie Hamilton, giving the Canes a legitimate top defensive pairing that could shut down, and score on, any team in the NHL.

Slavin posted his best offensive statistics in his career despite only playing in 68 games this year. We’ve always suspected Slavin had more offensive potential than he had shown, and pairing him with Hamilton allowed both players to thrive at both ends of the ice. His biggest offensive contribution of the year was probably his game winner in his hometown capping off a Hurricanes comeback late in December against the Avalanche.

The Hurricanes went from down 1-0 to up 2-1 in the course of 1:17. Less than 2 minutes left in the 3rd period, Jaccob Slavin scores in his hometown. Great stretch pass from Jordan Martinook and set up from Lucas Wallmark. pic.twitter.com/bU8WdinKUR

Number 74 also led the team in minutes played at 1,591, which equates to nearly 24 minutes of ice time per game. The next closest player was Brett Pesce at 1,334 minutes. He also led the Hurricanes in overtime ice time by over six minutes. Ice time may not seem like a super fancy stat, but Slavin ended up 17th in the entire league in minutes played and 15th overall in short-handed ice time.

Just in case you’re wondering why Jaccob Slavin is going to the All-Star Game. pic.twitter.com/7F5fy2AdqH

That goes to show that the Hurricanes depend on Slavin in every situation and he thrives with those extra minutes. Take the David Ayers game: Slavin logged almost 28 minutes that match, was a crucial part in shutting down Toronto and helping Ayers out, and that wasn’t even his season high in minutes.

Even with all the ice time, Slavin also ended up with just 5 minor penalties all year (somehow that’s not lowest on the team, props to Teuvo Teravainen). Slavin is not only reliable, but he is responsible as well, which is a rare pair of qualities in today’s NHL.

But everyone knows about Slavin’s on-ice play. Where Slavin really grew this season was in his role as an alternate captain and representing his team on a national level. With Justin Williams stepping away and Justin Faulk being traded, the Hurricanes needed two new members in their leadership core and Slavin made so much sense that some even thought he could be named captain. Slavin humbly accepted an alternate captain position and he feels like a better leader for the defensive core than Faulk ever was.

Slavin was also an All-Star for the first time this year, replacing Hamilton after he was injured. While Slavin likely should have been named to the game regardless of the circumstances, he was a consummate pro going out and making Hurricanes fans proud. Slavin was entered in to the accuracy contest and made quick work of the field in winning the competition.

From being an All-Star to being a part of a national curling tournament that took place in Raleigh during the season, Slavin has in many ways become a leaguewide face for the Hurricanes. While many know Andrei Svechnikov and Sebastian Aho as the stars, Slavin has been the one to go out and represent the team in the community, on a national level, and all throughout the league.

Slavin’s play earned him the opportunity to replace Hamilton at the All-Star game and it has even led to saying he should be in the conversation for the Norris Trophy. But for as great as Jaccob Slavin the player is, Jaccob Slavin the human in 10 times better.

2019-2020 was somehow an improvement for an guy who was already great. Slavin has truly gone from a number one defenseman to one of the elite few in the NHL. He may never win a Norris because that award has become more about which defenseman scores the most instead of who plays the position the best, but there is no doubt that if the award was actually for the best defenseman in the NHL, Slavin would be a finalist year after year.

Not too bad for a 4th round pick from Colorado College.