The market for Carlos Dunlap is heating up. ESPN’s Adam Schefter reports (via Twitter) that the free agent defensive lineman is visiting the Chiefs tonight. Meanwhile, Joseph Person of The Athletic writes that the Panthers continue to have interest in Dunlap after meeting with him earlier this offseason. 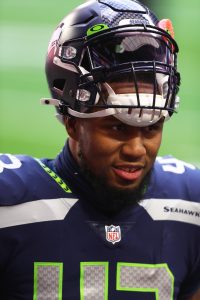 The two-time Pro Bowler got into all 17 games for the Seahawks last season, and while he only appeared in 38 percent of his team’s defensive snaps, he still managed to finish with 35 tackles and 8.5 sacks. Pro Football Focus was particularly fond of his performance, ranking him 30th among 108 qualifying edge rushers. PFF also ranked the veteran 16th at the position for his run defense, and his pass-rush grade was above average, so while Dunlap may not have the stamina to be an every-down player, he still has the skills to play in most situations.

Besides the Panthers and now the Chiefs, the Seahawks were the only other team mentioned as a landing spot for Dunlap. However, we haven’t heard a whole lot on that front in months.

The Chiefs have always seemed like a fit for Dunlap, although this is the first time we’re hearing the organization definitively connected to the 33-year-old. After losing Melvin Ingram III in free agency, Kansas City is currently eyeing Frank Clark and rookie George Karlaftis as their starting edge rushers. Dunlap might not necessarily supplant either of those two in the starting lineup, but he’d provide some experienced depth behind the duo.

Meanwhile, Person tweets that the Panthers continue to show interest in adding front-seven help, having reached out to Dunlap earlier this week. The veteran visited Carolina in June but left without a deal. The Panthers current in-house options to start opposite Brian Burns at defensive end include 2020 second-round pick Yetur Gross-Matos, Darryl Johnson, and rookie Amare Barno.