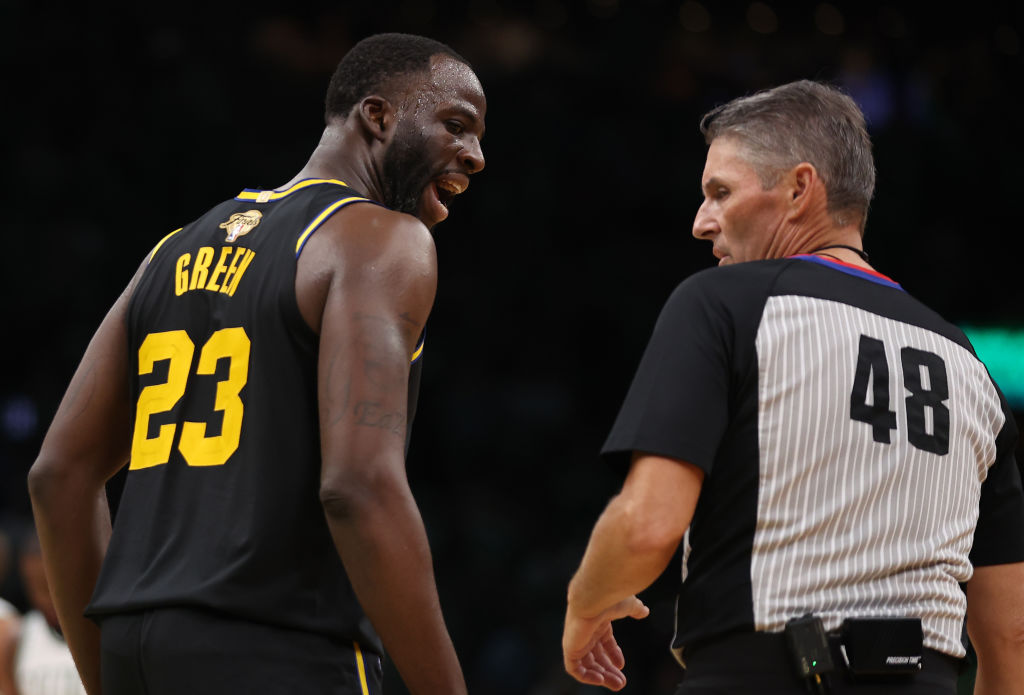 Draymond Green is still catching hell on Twitter following a well below mediocre performance in Game 4 of the NBA Finals.

It’s no secret Draymond Green is the Golden State Warriors’ heart and soul and sets the tone for the team just as much as Steph Curry and Klay Thompson do. But his struggles during these NBA Finals have put the polarizing NBA superstar under a microscope.

Draymond Green’s performance last night had #NBATwitter immediately roasting him. Green ended up with more fouls than points finishing the game with just 2 points, four rebounds, and three assists, or as Charles Barkley has called it, a “triple single.”

During his post-game press conference, Green acknowledged his poor play immediately, stating he played “like sh*t,” but he took exception when a reporter asked if Green is “conscious” of what he says during his podcast is giving the Celtics intel on his team.

“Are you conscious at all of what you’re saying about the X’s and O’s of the gameplans? The adjustments could be making their way back to Boston staffers and influencing their decision-making at all?” Bleacher Report’s Jake Fischer asked Green.

“No, I don’t see much difference on the podcast than I say to you right here, so nah,” Green responded before snapping back at the reporter and asking, “What’s the X’s and O’s that I said on the podcast?”

Fischer then pointed to Green discussing defending Derrick White, Marcus Smart, and Al Horford differently in the first two games of the NBA Finals on a Monday episode of his podcast.

Green laughed off the question and accused the reporter of “reaching.”

“Oh that’s just contested shots. If that’s X’s and O’s then… you’re reaching for something,” said Green. “It’s all good though. Keep going. Reaching heavy. When you find that they are taking X’s and O’s away from your podcast. The only thing you said was White, Smart and Horford, hmm. You went for it. Respect. Appreciate the podcast promo you gave me. ‘The Draymond Green Show,’ the next time just mention it that way.”

Draymond Green goes back and forth with a reporter who asked if his podcast could be revealing “X’s and O’s” for the Celtics:

“You’re reaching for something… You went for it. Appreciate the Podcast promo.” pic.twitter.com/QJMtntUoWj

NBA Hall-of-Famer and Detroit Pistons legend Isiah Thomas felt different and ripped Green for not being locked in and too focused on his podcast.

Twitter also agrees with Thomas. You can peep more reactions in the gallery below.

Podcasting is your passion bro, this basketball shit ain’t for you @Money23Green

first 15 minutes of that Draymond podcast explaining why he had more fouls than points, rebounds, or assists going to sound like defense trial testimony.

“ You have 4 rebounds, 3 assists and 2 points…grade school game”

Look like Draymond was more prepped for his post game podcast than the actual game. Just an observation, never mind me tho. Carry on…

U guy remember when Lebron kicked Draymond green after a game?

Draymond Green if he wasn’t carried by Steph & Klay throughout his career pic.twitter.com/SvvEmqw74x