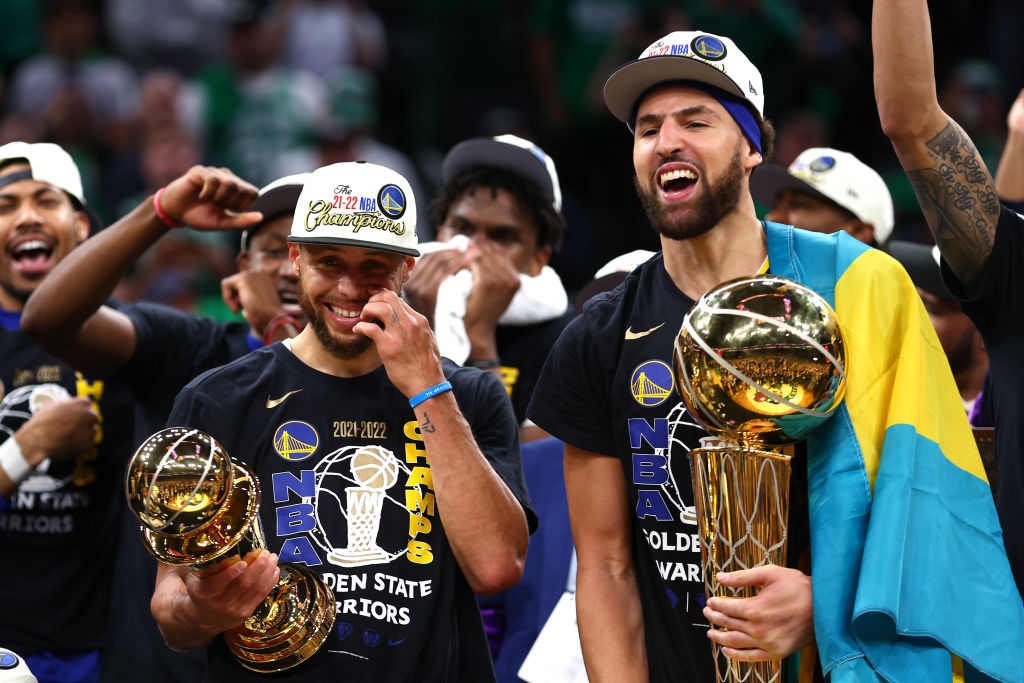 The 2021-22 NBA season has ended, and the Golden State Warriors have solidified themselves.

The Warriors may have won 4 NBA championships in eight years, but perhaps none mean more than the most recent. Gone is Kevin Durant, who helped propel them over the edge in 2017 and 2018 as they fought through growing pains and season-ending injuries over the past few years.

One of those excruciating injuries came when splash brother Klay Thompson suffered a torn ACL in his left knee in a Finals game, which led to an entire missed season, then injured his Achilles tendon, which caused him to miss another. After hoisting up the Larry O’Brien trophy, Thompson spoke about what it took for him to recover from those injuries and make it back to the mountain top.

“HOLY CANNOLI this is crazy.”

“Well, I had to have my big bro talk me off a ledge a few times,” Thompson said while reflecting on the past few years. “I couldn’t drive, I couldn’t do nothing. I was immobilized. I’m such an athletic person, I love to be mobile. And he would just tell me, ‘Patience, patience. It’s going to all pay off.’ I mean, there were some dog days, there’s a lot of tears shed on the bench,” Thompson said. “Steph talked me right, Draymond, just leaned on those guys, Andre [Iguodala]. I’m just thankful to be here, man. This is crazy. I can’t even believe it. I knew it was a possibility, but seeing in real-time, holy cannoli, this is crazy.”

The only ones possibly more excited for the win is Dubs Nation, who went all out on Twitter. Check out some of the best tweets below.

The Warriors looking at all of the receipts they kept over the last two years pic.twitter.com/frfIBvfTry

Kevin Durant tweeted that during the Warriors’ Game 1 loss.

Draymond Green responded after the Warriors won the title

Last week when the warriors were down 2-1 @andre VERY CONFIDENTLY at dinner said “It’s over in 6! We figured it out”

Love the spicy tone of so many quotes from last night from Steph, Dray, Klay, and Andre. Not sure we’ve ever seen something like that after a title. People had been talking crazy on this core’s legacy for far too long.

Welcome back to the Warriors Invitational, baby.

TL when they start to realize the Warriors are running it back next season pic.twitter.com/2g29T97B0m

Skip Bayless on his way to use the Warriors winning the Finals as a way to discredit Lebron’s Legacy pic.twitter.com/iPPAxM72bR

Me seeing these receipts pulled by Warriors fans.. y’all bless up man

No Warriors Basketball for around 4 Months just hit me