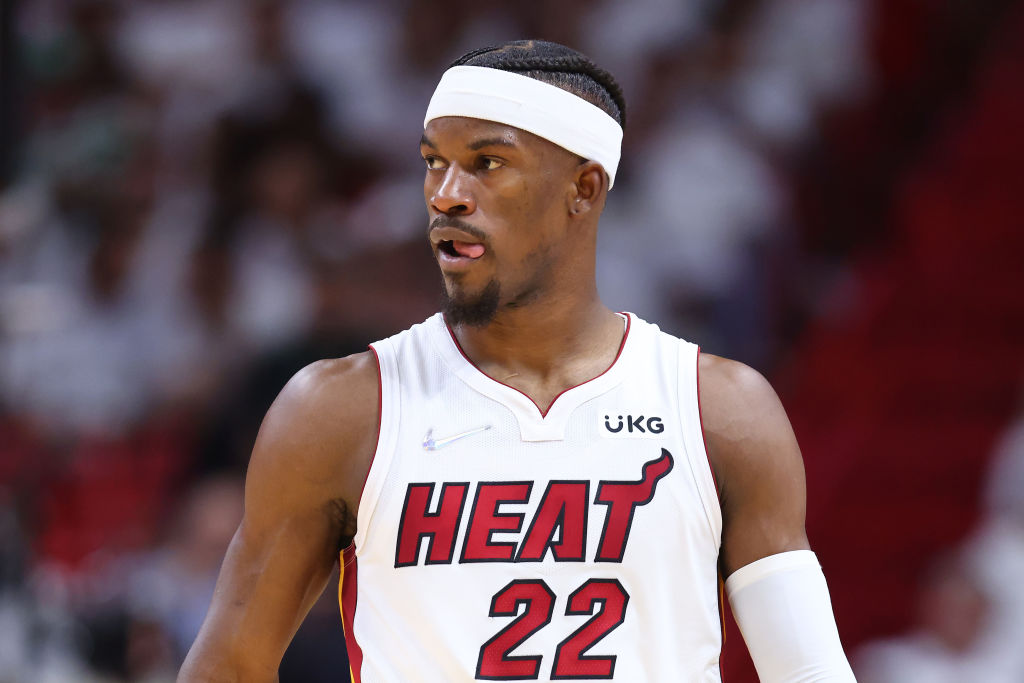 Players showing up looking a bit different at the beginning of a new season is nothing new.

Players like Carmelo Anthony and LeBron James dropped weight thanks to the keto diet, but now there’s Jimmy Butler.

The Miami Heat forward opted to change up his look by getting dreads added to his growing afro. The new look comes after Butler rocked short corn rows at the end of last season, but it seems like he just needed more hang time.

He revealed the new look to his seven million Instagram followers yesterday with a video sequence that showed him getting twirled around in a chair with his braids getting taken out, a freshly washed afro, his hair in braids, and then dreadlock extensions with blonde tips tied up in a bun.

“Now you see me now you don’t,” he captioned the photo as the instrumental for Lil Wayne’s 2011 hit “6 Foot 7 foot” played in the background.

Fans on Instagram and Twitter immediately started clowning Butler for his abrupt new look, and being the jokester he is, the baller upped the ante with a new post this morning, showing himself getting some shots up for the first time with the new long hair.

“What a dreadful workout.. no pun intended,” he wrote beneath a video of himself working out alongside celebrity basketball trainer Chris Brickley at the Long Island’s new Bridgehampton Killer Bees basketball court.

Butler’s been on a run since joining the Miami Heat in 2019 and led the team to the bizarre NBA Finals in the bubble. It all began with a sign and trade with the Philadephia 76ers, and Butler’s been enjoying his new home in South Beach ever since.

“I really enjoy playing for this coach, for this organization with the guys that I’ve got riding with me,” Butler told USA TODAY Sports upon the trade. “And I’m constantly smiling because I am happy. I’m home, and everything about this organization fits me. Everything about the guys on this roster fits me. You never know what the future brings, but I had a good feeling I was going to be extremely happy.”

Jimmy Butler after 3 years in Miami

Lebron texting Jimmy Butler to see where he got his fake hair pic.twitter.com/Y0YoV00Osr

This is where Jimmy butler went for his new look pic.twitter.com/YOQUlECuu8

Boy when the hell did Jimmy Butler start growing dreads?

.@JimmyButler with the dreads