Now the quarterback dominos are starting to fall. After seeing Desmond Ridder and Malik Willis finally get selected in the third round, the Panthers saw the writing on the wall and traded back into the third round to make their second selection of the 2022 NFL Draft: Ole Miss quarterback Matt Corral. 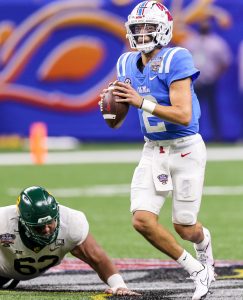 Corral spent his freshman season backing up current USFL quarterback Jordan Ta’amu and took a redshirt after only appearing in four games. He took over the next year as the Ole Miss starting quarterback and led the team to a 4-8 finish completing 59.0% of his passes for 1,362 yards and throwing 6 touchdowns to 3 interceptions as a redshirt-freshman. Corral developed over the next two years completing 69.5% of his passes for a combined 6,670 yards and throwing 49 touchdowns to 18 interceptions over his redshirt-sophomore and -junior seasons. The intrigue with Corral comes from what he adds on the ground. Over those final two seasons, Corral added 1,103 yards and 15 touchdowns rushing the ball.

What this means for the Panther-Baker Mayfield saga is yet to be seen, but it likely points to a stall in negotiations between the two parties.

The Panthers obtained the No. 94 pick used to draft Corral from the Patriots in exchange for their 137th (4th round) pick and a 2023 3rd round pick.